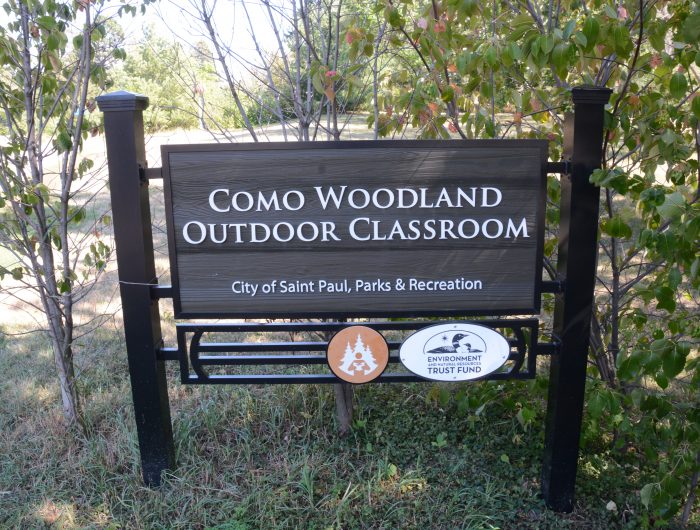 The Como Woodland Outdoor Classroom encompasses 17.5 acres at the corner of Hamline and Como avenues in the southwest corner of Como Park. The 27 interpretive stations are identified by posts, each of which is clearly labeled with a number and a QR code.

A few of these posts are noticeable while traveling through the park on Como Avenue.

My husband and I had been curious about the Outdoor Classroom for several years, so on a recent afternoon we walked over to the park armed with our printed map (available at stpaul.gov). Our mission was to immerse ourselves in the history and beauty of these gardens.

The suggestion to have an outdoor classroom originated after invasive buckthorn was removed from this overgrown area of Como Park in the 1990s. The District 10 Community Council formed the Como Woodland Advisory Committee in 2006, with city financing following for the project. Many volunteers and students worked tirelessly to establish these plant communities. The outdoor classroom was formally dedicated on May 20, 2015, according to historical information provided at comowoodlandoutdoorclassroom.org.

In walking the outdoor classroom trail, Jeremy and I discovered that some of the QR codes were difficult to scan, primarily due to excessive plant growth. So, in those instances we used the online guidebook instead.

We were immediately drawn to post #26, the nursery and bird sanctuary that features a colorful pollinator sky rise, which is habitat for nesting solitary bees. Scientists are studying the preferences of solitary bees while passersby can enjoy the whimsical display of public art.

The historic Como- Harriet Streetcar Line, post #19, was also one of our favorite stops. We learned that Como Park was difficult to access prior to 1893. But once the streetcar line was built attendance skyrocketed, allowing for over 1 million visitors in 1898! After years of decline, however, the route was abandoned in 1954.

But it is the massive stone fireplace, the only intact structure remaining from the original Joyce Kilmer Arboretum, post #3, that is surely the star attraction of the outdoor classroom. Built in 1936, it honors the famous poet, nature devotee and World War I hero. Fully restored and rededicated in 2011, the fireplace’s impressive craftsmanship is striking.

It took just over one hour to stroll through the classroom, making this activity a suitable option for park enthusiasts of all ages and abilities. Many of the numbered stops are wheelchair accessible. Children will enjoy locating the hidden posts, scanning the hard-to-reach codes and leading their friends and family members along the narrow, winding dirt trails. All of the numbered stops were informative.

But the highlight of this urban adventure was the simple pleasure of walking along some of the less popular paths that I hadn’t visited in many years. It is a peaceful setting to appreciate a quiet moment away from the crowds, surrounded by a multitude of trees so passionately described by Kilmer in his celebrated 1913 poem.

Janet Wight, a resident of Como Park where she lives with her husband and daughters, is a regular freelance writer for the Bugle.