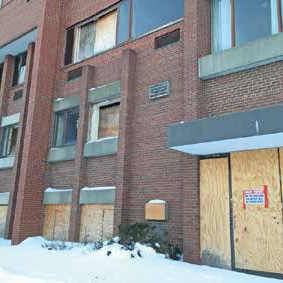 The District 10 Como Community Council’s Land Use Committee is urging approval of density and parking variances so developers can convert the former Sholom Home property into rental apartments.

These variances were expected to be part of a hearing by the St. Paul Board of Zoning Appeals scheduled Feb. 24 and their approval could mean that redevelopment might begin.

Interestingly, St. Paul’s Planning Commission is expected to consider changes to the zoning code this spring that may lessen parking requirements and increase the allowed density of simi­lar multiple-unit developments.

Midway Community Group LLC wants to renovate the former nursing home at 1554 Midway Parkway to create 150 rental apartments. Variances are necessary because the developer’s plan does not meet St. Paul’s existing zoning code for the property, which is zoned RM2 multi-family. Variances are specific exceptions to existing code requirements.

In addition, zoning also limits how many units can be built on the lot. Existing formulas allow a maximum of 82 units, not the 150 units developers envision. (For context, when the site was a nursing home, it had a conditional use permit that allowed 170 units.)

Area residents recommended approval of both variances at the district council’s Land Use Committee meeting Feb. 10. On a 31-9 vote, they supported a density variance for up to 150 units. On a 32-7 vote, they supported a parking variance of up to 86 spaces, provided the developer builds the 80 off-street spaces promised in the site plan.

This was the fourth meeting District 10’s Land Use Committee had with neighbors that focused on the redevelopment plan and its potential impact. As the Bugle went to press, the committee’s recommendation was scheduled to go to the full Como Community Council board on Feb. 18. The board recommendation, which would be advisory only, was scheduled to go to the Saint Paul Board of Zoning Appeals Feb. 24 hearing.

Chuck Repke, a representative of the developer, told residents that if the variances are approved the first tenants should move in during spring 2021.

Repke said he believed the apartments can be marketed successfully to renters who choose not to have a car, but instead rely on transportation such as the A Line bus that runs along Snelling, ridesharing, bicycles and electric scooters. That target includes older adults who are downsizing, young professionals and graduate students at the nearby campuses of Hamline University and University of Minnesota. Of course, he said, tenants better love the State Fair, too, which takes place right across the street.

Rents are likely to start at $990 for the smallest units and run as high as $2,500 a month for the largest units, Repke said. The project envisions several communal amenities, such as a barbecue patio; bike parking; indoor workout, activity and media rooms; and a rooftop garden. The redevelopment will not seek any public subsidies, he said.

While some residents raised concerns about year-round congestion and clogged street parking, others said those problems would happen with any new development to the property, which has been vacant for a decade.

District 10 estimates 86 more cars on the street would fill up the blocks immediately adjacent to the property—Canfield Avenue, Arona Street and Midway Parkway—but generate little additional spillover to the rest of the neighborhood except during snow emergencies and the State Fair.

Repke said the narrowness and slope of the lot limits options for additional on-site parking. He said the number of load-bearing columns and narrow dimensions of some buildings makes it impossible to increase the number of two- and three-bedroom units and keep the existing structures.

Shadowing these variance requests is the fact that the city’s Planning Commission is considering two major changes to the existing zoning code. One would allow greater density in multi-family districts; District 10 estimates that change would allow a five-story structure with as many as 351 units on the 2.6-acre Sholom Home site. The Planning Commission has scheduled a public hearing on that proposal for April 17.

The other zoning revision would reduce (or even eliminate) required parking for projects along major transit routes. The 1554 Midway project—which is adjacent to the Snelling Avenue A Line—would qualify under that proposed change.