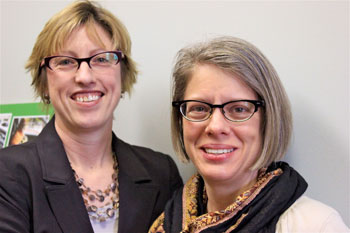 Lisa Stratton, Jill Gaulding and their nonprofit, Gender Justice, were named Changemakers in December by the Minnesota Women’s Press.

You never know where a Google search might lead. Several years ago, attorney Jill Gaulding moved to the Twin Cities from Iowa. Seeking her niche, she plugged some words into the search engine.

“Lisa [Stratton] popped up immediately,” said Gaulding. “I thought, ‘I have so much in common with this person; I need to meet her.’” Gaulding doesn’t recall the exact search words, but says, “They were probably something like ‘discrimination,’ ‘employment’ and ‘gender.’ ”

A few years later, Gender Justice was born. Stratton, a resident of St. Anthony Park, and Gaulding co-founded the nonprofit in 2010 with a mission to address the causes and consequences of gender inequality through impact litigation, policy work, and public education and training.

Upon finishing law school nearly 20 years ago, Stratton dreamed of starting something like Gender Justice. After exploring the concept, she decided to gain litigation experience first—and hasn’t regretted it. Her clients included blue-collar women subjected to hostile workplaces.

“Part of what it took was having the right partner,” said Stratton of the gap between the Gender Justice dream and its fruition. “I’m not a lone wolf—I like to collaborate.”

When choosing cases, Gender Justice prioritizes clients who traditionally have had difficulty accessing justice, for example, low-income or immigrant workers. Beyond that, they seek cases that not only serve the individual plaintiff but that illuminate a broader problem and bring systemic changes.

One such case that was recently settled involved the alleged workplace rape of Leticia, an undocumented immigrant employed by a national housekeeping services company as a housekeeper at Ridgedale Center in Minnetonka.

Although the settlement is largely confidential, Stratton cited with satisfaction the company policy changes that resulted. These include training in sexual harassment and providing workers with the company’s human resources contact information so workers know where to bring complaints. Leticia did not have the employer’s contact information; her only point of contact was her direct supervisor—and he was her accused rapist.

To bring public attention to the issue, Gaulding and Stratton held a press conference and a “drive-in” last year in Minneapolis, coinciding with a campaign by Saudi women activists to gain driving rights in their country. The two Minnesota lawyers enthusiastically handed out fliers and green ribbons (symbolizing Saudi Arabia’s flag) to passers-by on Lake Street.

Gaulding stressed that while women’s rights are central to Gender Justice’s mission, it’s broader than that. Whenever someone is punished for not fitting gender norms, they want to know about it. “It could be a dad who wants to be an active parent as well as an employee,” she said, or a gay man who doesn’t act like men “should.”

At any given time, Gender Justice has about 10 cases under way or under consideration. As the co-founders, Gaulding and Stratton work long hours, and they are profusely grateful for their volunteers and interns. At some point, they’d like to expand.

Ultimately, both women hope for the day when Gender Justice won’t be needed.

Said Stratton: “We would love to put ourselves out of business.”