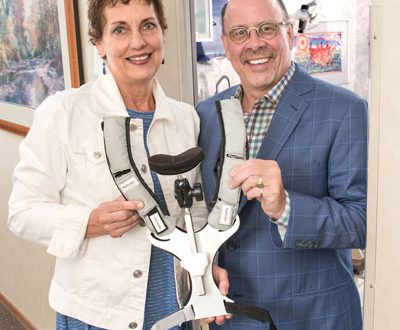 Easing the pain in the dentist chair

It looks like a front-pack baby carrier sprouting a cushioned chin-rest instead of an infant, but its developers think it will address a problem that afflicts as many as one in 10 dental patients.   University Grove resident Eric Schiffman is a professor of dentistry at the University of Minnesota, specializing in oral-facial pain management. He and his wife, Karen Kloser, have formed a company to market a device that they call the Restful Jaw. They say it tackles a problem that your dentist rarely mentions, because—until now—there was no prevention.

Temporomandibular joint disorder, popularly known as TMJ or simply jaw pain, afflicts about 30 million Americans. It affects more women than men and it can last for years. “It can be quite severe,” says Schiffman. “It’s the second-most common chronic pain condition in this country after back pain.”

TMJ can arise from a number of causes, but one significant way to be afflicted is by keeping your mouth open too wide and too long during prolonged dental procedures. For some people, that leads to a temporary ache that subsides soon after the Novocain wears off. But for an unlucky few, TMJ can become a chronic condition, so uncomfortable that sufferers forego dental care rather than risk intensifying the pain.

Schiffman and Kloser have dubbed their device a “couch for your jaw,” because it cushions and supports the jaw during dental procedures. Schiffman says he got the idea from a patient who had been referred to him by her regular dentist. She told Schiffman that she wanted to hold her jaw with her hands to lessen pain during dental work, but she reported that “[my dentists] say that my hands get in their way.”

Schiffman understood that the patient was trying to support her jaw against the force of her dentist’s technique. He explains that, during complex dental procedures like extractions, crowns or fillings, “the dentist pushes down on the patient’s jaw. This gave me the idea of working against the push.” By modifying a cervical collar used to immobilize the neck, he was able to design a mechanical support for the jaw.

Schiffman had worked on the idea informally as part of his own clinical practice for several years, but it wasn’t until 2011 that he and his wife decided to form a company and bring the device to market. It was a momentous decision for Kloser, in particular, but the couple was in their 50s, their two children were grown, and Kloser, who has a background in marketing and public relations, was at a turning point in her career. “She either had to find a new job or do this,” is the way her husband puts it.

Kloser acknowledges that nothing about her education or career plans ever suggested that she would one day find herself running a medical-device company and making a name for herself in a field with few women in leadership positions. “Starting a company was never on my radar screen,” she says. “This is like having your third child, but it’s way more expensive than the first two.”

Still, she did bring some invaluable knowledge to her new position. For one thing, Kloser herself suffers from TMJ. When she talks about the advantages of her product, she brings a note of heartfelt conviction to her sales pitch. “You can soup up dental offices with background music, warm towels, massages,” she says, “but the Restful Jaw is the real deal to reduce pain and fatigue.”

The startup challenges have been considerable, and the timeline involved in bringing the finished product to market was longer than they imagined. “As we took it from prototype to clinical trial to polished version, we brought in an engineering firm,” Kloser says. “It took them two years to make it pretty.”

Meanwhile Kloser and Schiffman were also recruiting investors, attending tradeshows and doing their best to establish their brand. “All of the pieces were going on at the same time,” is how Kloser explains it.

The final version of the Restful Jaw is a complex creation of polished metal, multiple straps and cushioning memory foam that must be adaptable to the complete range of patient body type and height. Teaching dental professionals how to use it is “challenging,” admits Kloser. “There’s a learning curve.”

Fortunately, dental professionals have a natural talent when it comes to mastering complicated equipment, “Dentists must think three-dimensionally,” points out Schiffman. “They usually have a good spatial sense.”

There’s also the challenge of overcoming patient reluctance. It’s one thing to ask a patient to don a dental bib, another to ask him or her to submit to the process of being strapped into the Restful Jaw. “It goes beyond what’s in your mouth,” says Kloser.

The proof of the process, of course, lies in the ultimate comfort of the patient. And patient comfort is good for business. “A pain-free patient is more likely to be a loyal patient,” says Kloser. Painless dental encounters mean patients need fewer breaks and spend less time per procedure in the chair, which can make them more amenable to cosmetic and other dental interventions.

The Restful Jaw is now being used by several dental practices in the Twin Cities, including the University of Minnesota’s School of Dentistry and the Twin Cities Veterans Administration clinic. Kloser and Schiffman have also successfully placed their product with several area dentists in private practice, including one very close to home.

“I’m not an early adopter,” says Dr. Paul Kirkegaard, who has practiced dentistry from his offices on Como Avenue since 1985. “I’m more of a skeptic.” That didn’t stop him from introducing the Restful Jaw into his practice about a year ago, partly because Kloser convinced him to try it, but also, he says, “because I know her husband is a dedicated researcher.”

Kirkegaard describes the device as “part of the armentarium that we can use in our practice. The general populace needs to know about this. How many people are avoiding dentistry because they don’t know about it?”

In Kirkegaard’s practice, it is registered dental hygienist Alycia Olson who is acknowledged to be the office expert on the Restful Jaw. She’s the one who is most likely to help the patient don the device, and she says, “Patients for whom it makes a big difference … they’re very emphatic about using it. Some won’t do without it.”

When it comes to the Restful Jaw, Olson’s most memorable patient was a woman who suffers from Ehler-Danlos Syndrome (EDS), a genetic disorder that can be marked be overly flexible joints. Before the Restful Jaw, a dental appointment could lead to weeks of excruciating pain for this patient. “She was very happy to encounter [the device],” Olson says.

Even with glowing testimonials, Kloser and Schiffman have learned that starting a business is never a uniformly smooth process; but when the co-founders are married to each other, it can be more complicated still. Kloser and Schiffman have known each other since they went to the prom together back in high school in Dubuque, Iowa. They joke that they are lucky that they started their business after their midlife crises. Even so, they’ve had to establish boundaries between the business and their private life.

“I’m the face of the company to the medical and dental community,” Schiffman says, “but she’s good at the details.”

Do they have any start-up advice? “Thank God for the Internet,” says Kloser. “If you don’t know something, hire somebody to do it. Then dive in.”