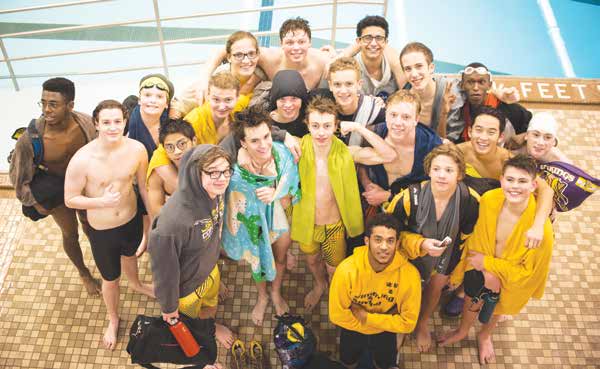 While a junior varsity swimmer, alone in the water, pushed himself to finish the final lap of a race, 20 teammates on the pool deck supplied encouraging cheers and provided the energy boost to bring the first-year swimmer home.

An eruption of noise ensued when the Cougar completed the event and touched the wall.

This scene is the norm for the Como Park High School boys’ swimming program. The support for every swimmer, regardless of experience, skill or speed, is a source of pride for the Cougars.

From the veterans swimming multiple miles, to the novices developing their first technical strokes, the boys bond and train together. They also go to their competitive meets as a pack. Divisions of varsity and junior varsity only reveal themselves in scoring columns, not in vocal inspiration for each other.

The architect of the Como swimming culture is Steven Conery. In his 19th year as the Cougars’ head coach, Conery says he enjoys helping his athletes improve. He adds he has become even more dedicated to the sport since he first started in 2001.

Conery was an accomplished swimmer at Carleton College where he qualified for the NCAA D3 national meet in 1987. Como social studies teacher Justin Mann is serving his second season as an assistant coach. Mann earned a swimming scholarship at Tennessee State University.

The two coaches bring a wealth of experience to the Cougars, finding ways to blend their knowledge and expertise in order to reach each swimmer at their own level and build paths for improvement.

“Having someone as dedicated to the sport and with the experience (Coach Mann) brings is incredible,” Conery said. “He’s a great motivator and brings his own special way of working with the swimmers and he supports my focus on helping everyone improve in every stroke through stroke-specific drills and sets.”

Mann says Cougar swim coaching is a joy, noting the student athletes are “high-spirited, and willing to take instructions. They want to be fast and they have a really good work ethic.

“Coach Conery comes up with all the sets,” Mann continued. “I help with the technical aspects of strokes for the beginning swimmers. What’s so cool about them is that they’re just willing to learn.”

Some of Conery’s current varsity swimmers, now scoring points in meets this year, were once beginners.

“I learned a lot from coach and all the older kids back then. There was a lot of team inclusiveness,” Napierala recalled. “Now as a captain, we help new kids learn how to do stuff and make them feel welcome and make it fun.”

Senior co-captain Jack Schumacher joined Como swimming as a sophomore. With no prior swim experience beyond splashing around and treading water, he quickly learned strokes, improved technique, bought in to the work ethic and enjoyed the camaraderie of the team.

Schumacher’s massive gains led him to All-Conference honorable mention status last season in the breaststroke, and the obvious respect of his teammates as a chosen captain.

Napierala is also an all-­conference honorable mention returner with top-tier times in the butterfly.

Sophomore Soren Sackreiter may have state-level potential, having already earned St. Paul City All-Conference status as a freshman in 2019.

Conery can count on these six to swim fast and score varsity points. “This nucleus is joined by incoming freshman Sigurd Isaacson, who I believe will be at the top of the conference meet in the distance events,” he said.

While Como’s swimmers generally excel in a specific event, being versatile is also a key component to the Cougars’ training and competitive goals.

“With the effort they give in practices and the assortment of sets we do, they’ve grown into and have had fun competing in every event—their specialty events and their “off’ events,” Conery explained. “This gives us the flexibility to have two to three swimmers competing for first place in every event in dual meet competition; and with our depth, we can compete for every point possible.”

The Cougars diversity in age and swimming experience is a plus with the bond between the swimmers strengthened in dining rooms, as well as in the pool.

Pasta dinners provided by parents are a source of fuel the night before meets. And a reminder about what adolescent boys can quickly consume. “A few pounds of spaghetti and a couple gallons of chocolate milk,” according to the captains and confirmed by the parents.

The carbo-loading is part of the recipe for Como’s swimming success. The main ingredient is the shared belief that it’s fun to try new things and work hard at them with like-minded people.

The coaches and the athletes are eager to see how they measure up in the city and section meets during February.

“I believe we can compete for first place in a number of events at the conference meet and hope to qualify a swimmer or two and a relay team to the state meet,” Conery said.

Whatever the results, one thing is certain: Fellow Cougars will be cheering them on—all the way through their final lap.