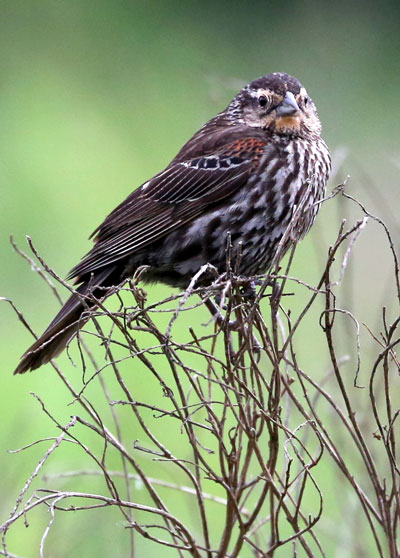 Everything you’ve wanted to know about the red-winged blackbird

The red-winged blackbird is perhaps the most abundant and most commonly studied bird in North America. The male is readily recognizable by his red epaulets bordered with yellow, which he can cover or reveal, depending on whether he’s trying to remain unnoticed or if it’s time for boldness. The female is brown and streaky with an orange or salmon-colored wash on her throat.

While we may occasionally see a red-winged blackbird in winter, the majority start to return to Minnesota in March. Those that continue farther north are migrants. Those who stay here are residents.

Migrant adult males are first to pass through on their way to territories farther north. They may spend a day or two on a marsh, resting and refueling before continuing their migration. These males don’t exhibit territorial or nesting behavior.

The next wave is resident adult males returning to the previous year’s territories. They defend them vigorously, singing from perches, making threat displays and chasing away everything that dares to intrude on their territory, such as other males, other birds and even females when they arrive later.

Next to pass through are migrant females and immature males. If they stop at one of our marshes, they will be chased and harassed by the resident males who are claiming territories.

Resident adult females, the focus of this territorial brouhaha, make their arrival a few days after the resident males. The adult males are so hormonally charged they even chase the females around the marsh—at least at first. The females stay low in the cattails, checking out the territories and prospective mates.

A female will look for cattails, reeds and grasses with which to make a sturdy nest. She will also seek a source of fresh water and ample insect life for food.

For a mate, she may very well check out the shoulder patches on the male. Brighter, bolder color may indicate he’s healthy, knows how to catch nutritious bugs and would be a good provider for her nestlings.

When she finds what she’s looking for, she flies in next to her chosen male, perches nearby, and waits to see if the feelings are mutual. She’ll know when he starts following her around, not just trying to drive her off.

Finally, the last red-wings to arrive, the resident immature males and females, have little to do with the breeding dance (at least this year). They keep to themselves, roost together at night and try to avoid conflicts with the resident adults.

Male red-winged blackbirds are polygynous with up to 15 females each. Busy, busy and watchful. If he doesn’t pay attention, another male may sneak in for a quick dalliance with one of his mates.

In the red-winged bird world, the female builds the nest, weaving string-like reeds and grasses around a set of erect cattails or reeds, which serve as a vertical support. She builds a cup nest about 4 1/2 inches across with an inside opening of about 3 inches.

The female chooses her nest site carefully, making sure the supporting reeds are either all living or all dead. A mixture of living reeds and dead ones will cause a problem later on. As the live reeds grow taller, they will carry a nest along with them. Any dead reeds would hold the nest back, eventually causing it to spill open.

She’ll lay an egg a day until she has three or four in the nest. The eggs are elliptical, about 1 inch by 3/4 inch, pale blue-green to gray with streaks, blotches or black/brown spots, mostly on the larger end.

Only the female incubates the eggs. When born, the hatchlings are altricial, both blind and naked. The female broods them at night and when the weather is cold or wet. While the females are brooding, the males roost together. (Was it not ever thus?)

Incubation normally lasts about 12 days. After hatching, the nestlings are ready to leave the nest in another 12 days. During that time, both parents bring dragonflies, moths, butterflies, other insects and spiders to the youngsters. Food service continues for up to two weeks after the kids leave the nest and even another three weeks away from the nesting territory.

The young red-wings settle in with flocks of females for the rest of the summer. In the fall, they head south in mixed flocks of starlings and other blackbirds. They’ll be some of the resident immatures that return the following spring. The adult males are the last of this species to migrate at the end of the season.

It seems incredible, but winter roosts in the southern United States can reach several million birds. They also can become agricultural pests and lead to urban noise and sanitation problems.

I think I’ll take their summer to their winter presence any day.

Clay Christensen lives and writes in Lauderdale. His book, The Birdman of Lauderdale, is available at local bird stores, bookstores and BirdmanBook.com.