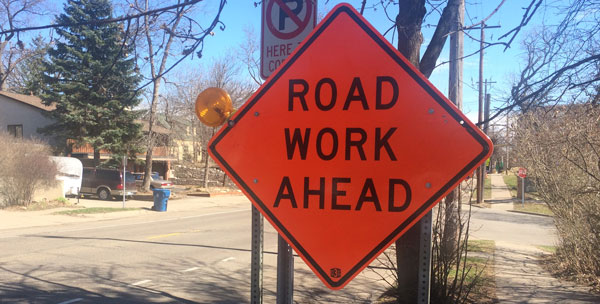 In case you haven’t noticed, there are several road construction projects that may hamper your travel in and around Bugleland this summer.

Construction season began April 3 along Snelling Avenue, from Como north to Larpenteur avenues. Traffic is closed to one lane in each direction. This summer-long Minnesota Department of Transportation project eventually will extend to Highway 36 and includes concrete replacement and additional turn lanes at Snelling and Larpenteur. There will be no construction activities during the Back to the ’50s car show June 22-26 or the Minnesota State Fair Aug. 21-Sept. 5.

Raymond Avenue closed between Standish Street and Energy Park Drive April 10 to complete Phase III of the Raymond Avenue reconstruction project. The city will remove the elevated sidewalks under the railroad trestle and replace them with lower sidewalks and bike lanes. This project is expected to be completed by the end of June.

All pedestrian and bike traffic will have access to walk through the jobsite and under the trestle. Project engineer Mike Vanbeusekom may be called with any questions: 651-775-6673.

The reconstruction of Raymond Avenue was a three-phase project that began in 2013, but the planning for it began in 2004, when District 12 residents and officials sought to calm traffic along the corridor.

In May, water and gas crews will begin work on the Como Avenue paving project, a multi-year project that will begin from Raymond west to Commonwealth Avenue. The project will include adding boulevard trees, concrete curb and gutter, concrete out walks and driveway aprons, lantern-style street lighting, sewer and water-main repairs as needed, sodded boulevards, storm sewer catch basins and bituminous pavement.

Como Avenue was last paved in 1960. The sidewalks along the street were installed in 1969.

You can find out more about the Como and Raymond projects at www.stpaul.gov/departments/public- works/road-construction.