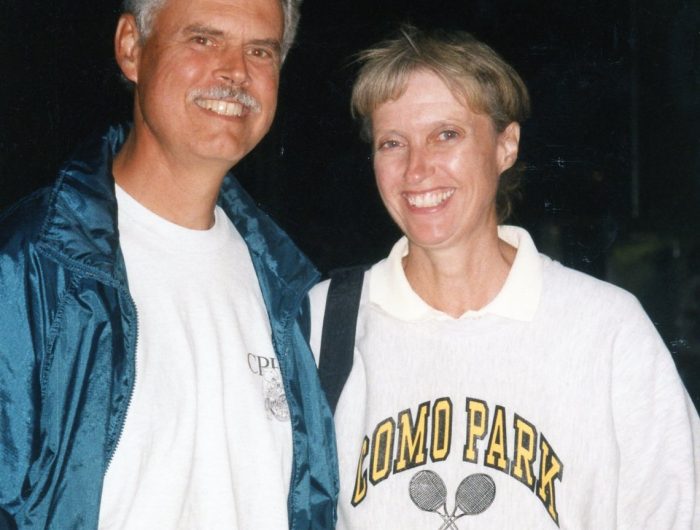 Fifteen years after retiring from education, Dumas continues to support and inspire: Her donation of $400,000 to the Como Park Athletic Department will fully cover the cost of rebuilding the school’s tennis courts.

The deterioration of the courts—coupled with delays for the school district’s funding of a resurfacing project—prompted Dumas to act. The tennis court design details were reported in a St. Paul Pioneer Press article published in late December.

Since then, Kathy’s former colleagues, students and athletes have been reminded of the spirit, commitment and unselfish service she had displayed daily. With this extraordinary financial gift, Dumas is doing more than improving resources at Como. She’s demonstrating lessons in advocacy and generosity.

“I’m fortunate,” Dumas said. “I have a little bit of money we saved. I always told the kids, someday when you have money you can give back. If you give to something, you really have to believe in the cause to which you’re giving.”

Dumas’ belief in the Como tennis programs stretches back to the fall of 1980 when she began coaching the Cougar girls team. In the spring of 1982, she started coaching the Cougar boys team, as well. Dumas led both programs through 2007 when she retired after 40 years teaching English in the St. Paul Public Schools.

Kathy Dumas taught a variety of English courses throughout her career including Advanced Placement English for seniors. She was known for eliciting the best effort from her students by balancing her high expectations with steady support and compassionate encouragement.

Kathy employed the same formula in her coaching, which also included several years of assisting Como’s Nordic ski team. Regardless of the sport or season, there was one additional ingredient that strengthened any team guided by Kathy Dumas: her husband and coaching partner Dick Dumas.

Dick was a mathematician and software engineer at UNISYS for his entire professional career. As a volunteer tennis coach alongside Kathy and a head coach for Nordic skiing, he was part of a humble duo who demonstrated the value of a true partnership.

Matt Olson was a Como tennis captain who graduated from Como in 2004. He remains grateful for the experience of playing for his beloved coaches.

“Their program was the gold standard for high school athletics: positive, inclusive and full of life lessons,” Olson said.

“New players were welcomed and encouraged. They offered free hitting sessions during summer evenings. Many nights they provided pizza and snacks. People stayed until it became so dark that we couldn’t see the ball anymore. Ms. and Mr. Dumas were always the last people there. They were always there for us.”

Currently, Olson is a third grade teacher and volunteers as a tennis coach. He and his wife Jenni have three young sons who are certain to receive warm encouragement when they step onto any tennis court.

Kathy fondly recalls the times that she and Dick shared together on Como’s tennis courts coaching kids like Matt, and hundreds of others from a variety of cultures who bonded through a sport they enjoyed.

“Como is a good place with good people,” Dumas said.

In October of 2009, a countless number of those Como people gathered in the neighborhood at Ideal Hall on Dale Street to comfort Kathy and celebrate the life of Dick Dumas. His passing from lung cancer changed Kathy’s plans for retirement. So did her own health with the onset of multiple sclerosis.

While Kathy Dumas isn’t able to see all the people who appreciate and admire her, one of her regular visitors is another former tennis captain, Koua Yang from the class of 1994—who now serves as Como Park’s athletic director.

Like most talented and competitive high school athletes, Yang was primarily concerned with winning when he played for the Cougars tennis team. Now, he’s come to realize many more important life lessons from Coach Dumas.

“Her generosity with her own time stands out,” Yang said. “With time, the relationships and time spent together were more important than the wins and losses.

“Many people pursue the materialistic idea of being rich. In the end, what matters most is the core you have with family and meaningful relationships built over time. In my humble opinion, that is what rich means. A lesson from the coach.”

The influence of Kathy Dumas continues to shape a generation of Como alumni who were blessed to be with her in the classroom and on the courts. Her extraordinary generosity and advocacy for a cause she believes in—a good place that Kathy and Dick Dumas loved and served—will ensure another generation of Como tennis players are supported too.