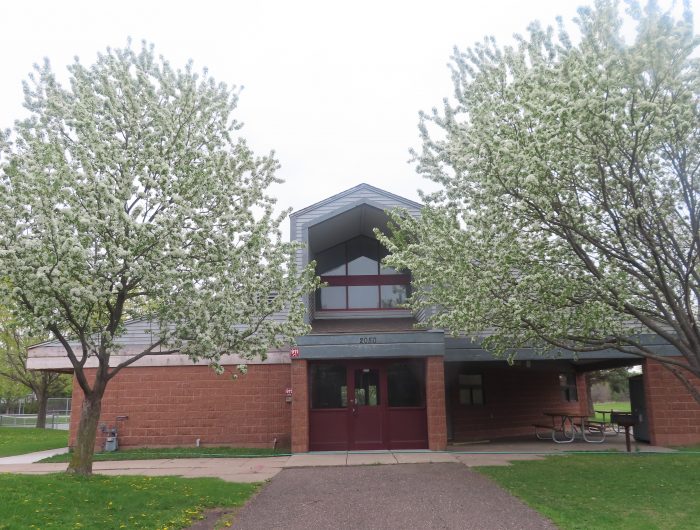 After city staff and parks commissioners toured Roseville parks in April, the Falcon Heights City Council took up the question of replacing an outdated building at Community Park at its early May workshop meeting.

A proposal to replace the building will likely come before the Parks and Recreation Commission at its June 7 meeting, according to Falcon Heights Administrator Sack Thongvanh.

The building, a shelter for youth sports teams and often rented for parties and meetings, needs extensive repairs and does not comply with standards of the Americans with Disabilities Act, according to city officials.

City leaders have been talking for several years now about whether to repair or replace it. An effort by the city last year to get state bonding money for a new park building fell short.

Community Park, at the southeast corner of Cleveland and Roselawn avenues, sits on land owned by the University of Minnesota which it leases to Falcon Heights for $1 per year. To replace the existing park building, the city must negotiate a new lease with University officials.

The current park building dates back to 1990, when the University approved the $300,000 structure and agreed to cover the remaining debt if the University wanted to reclaim the property before the end of the city’s 20-year debt service period.

At the May 5 City Council workshop, Thongvanh said he was pursuing a similar arrangement with the University for a new park building, although costs will likely be several times higher after a 30-year interval.

Thongvanh said he hopes the city can cover about half the construction cost from existing capital improvement funds while the rest would be covered by issuing tax-abatement bonds, with debt service adding to the city’s property tax levy.

University of Minnesota Assistant Vice President Leslie Krueger has been working with Thongvanh to craft a new agreement.

“The University is in the process of updating its Twin Cities Campus Master Plan,” Krueger told the Bugle, “but the administration does not envision proposing a change in the land use for this parcel as part of the planning process.”

Thongvanh said the Cedarholm golf course building is too large and expensive to serve as a model for Falcon Heights, but the other two Roseville park buildings are good examples of what it might build. He said he will recommend more meeting space and less kitchen equipment, because Roseville staff told him that caterers increasingly bring their own equipment.

Thongvanh said one important feature of a new park building would be to have greater electrical capacity for caterers and other services. Other tentative plans would include a warming area for winter skaters.

Council members noted the Parks Commission has asked that a year-round rink structure be installed, which would add a couple of weeks at the beginning and end of each winter season. Summer uses for such a rink might include pickleball, inline hockey or skateboarding.

City Council members asked about the timeline and bidding process. Thongvanh said there are two ways to approach bidding: lowest-bid, which brings the project in at the lowest possible cost; and best-value, which allows the city to consider values such as supporting local businesses at possibly higher cost.

He said large projects typically tend to be done by lowest bid.