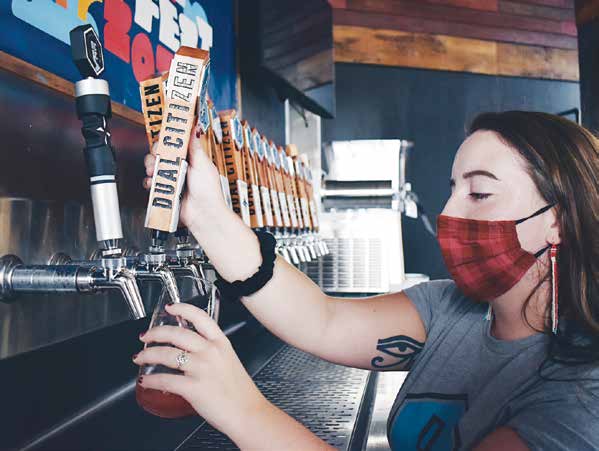 On sunny fall mornings, the sidewalk outside of Colossal Cafe on Como Avenue is full of people eating at 10 tables scattered up the church steps next door and around the corner post office. The lively outdoor dining scene has helped keep the eatery going through COVID-19.

But it’s coming to a close soon.

“It’s been really fun to have people outside eating everywhere this summer,” said owner Elizabeth Tinucci. “But everyone in the restaurant industry is very concerned for the winter.”

With Covid cases still high in Minnesota, many people still avoid indoor dining, especially in small spaces like the ironically named Colossal Cafe. Tinucci hopes to reduce the indoor risk with some new air purifier units, but she’s also promoting takeout. Her efforts are one example of how local food and drink establishments are improvising to keep sales up as temperatures fall.

“Take-and-bake is going to be really great for the fall, as we get into that cozy season,” said Tinucci. “We’re going to offer heartier items that are best heated up and eaten at home.” Look for dishes like meatloaf, beef stroganoff, pot roast and ribs. New menus are posted Sundays and food is picked up Thursday and Saturday.

Tinucci created the take-and-bake menu only after COVID-19 hit.

“When you’re trying to make up a drastic loss of sales, you have to do something drastically different,” she said.

What could be more drastically different right now than opening a restaurant?

Sandy Khunsri and husband Terry Spotts, owners of Karta Thai on Como Avenue, purchased an old Taco Bell in Roseville more than a year ago. After holding off as long as financially possible, they finally opened it at the end of August and are offering “takeout-only” at both locations. Khunsri initially had planned to do away with the drive through, but then realized it would be an asset.

“It will be good for the winter,” she said. “It’s cold and there’s the snow and people don’t want to get out of the car.”

As a bonus, the Roseville location is open Sunday when the Como location is closed. She’s feeling lucky that total sales are only down 25 percent at the Como spot.

“Neighbors support us a lot,” Khunsri said. Now she hopes she can build takeout business in Roseville.

Dual Citizen, which opened its brewery and taproom almost three years ago on Raymond Avenue just south of University, can’t rely on takeout-only, though it does sell growlers online to be picked up at the bar.

The brewery expanded its patio by moving five picnic tables into the parking lot. Now they’re extending the outdoor season with a half dozen patio heaters and walls on the patio tents.

“We know that Minnesotans don’t mess around,” said marketing director Becca McDermott. “We’ll come out for a beer if we’re not freezing our butts off.”

Tables indoors and outside are well spaced, bar service has been suspended and people order and pay for beer on their phone with a credit card from their table. Even the Tuesday trivia is getting reworked.

“It’s a Covid version of trivia that keeps everyone safe,” McDermott said. “It’s all on your phone. The questions will be displayed on jumbo screen.”

Although she was shaken by the news of Surly’s indefinite closure of its beer hall, McDermott said she thinks Dual Citizen will make it. Their new brewmaster is busy coming up with beers for the cool weather.

On Oct. 12, Dual Citizen plans to release a dark and smoky fest beer. It comes on the heels of their fresh hop beer, named for what everyone in the restaurant business is likely thinking right now —“Hop We Get Through This.”

Maja Beckstrom is a journalist/writer who lives in St. Anthony Park.