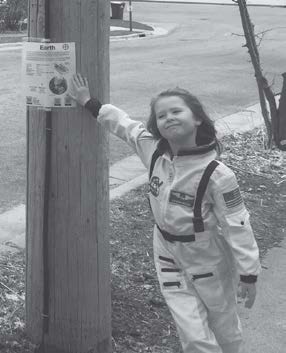 On what felt like the umpteenth day of Gov. Tim Walz’s stay-at-home order, Bill Prouty posted a video on the St. Anthony Park Neighbors Facebook page introducing a free, kid-friendly activity created by his family.

“We built a little neighborhood science project, the SAP City Space Walk,” he stated. “It is hard to imagine just how huge and spread out our solar system is, so we made a scale model in our neighborhood that you can walk through.”

The Prouty Drajkó family describes their Space Walk as “a science project, a scavenger hunt, street art and a neighborhood experiment.” Participants begin their journey at the Sun, located on Knapp Street in front of the elementary school, and proceed to locate each planet as one’s smart phone directs.

Lilli Prouty, a St. Anthony Park Elementary second-grade student, advises in the video, “Walking between the inner planets only takes a few minutes, but you might want a bike to travel beyond Jupiter.”

Bill noted, “Picking a scale (for the solar system) was a little tricky. Too big and you end up in Stillwater; too small, and all the planets end up the size of grains of sand.” In the Space Walk’s final scale, Pluto is in Como Park and Earth is the size of a green pea.

The family’s idea for the Space Walk project came from a visit to the Smithsonian Air and Space Museum. Bill explained, “Last summer, Julianna and I took a trip to Washington, D.C., to celebrate her becoming an American citizen.” (Julianna, Bill’s wife is a native of Hungary.) While there, they visited a similar scale model of the solar system called “Voyage,” which spans the length of the National Mall.

“It really demonstrated to me how vast our solar system is in a way that books and multimedia can’t,” Bill said. “Ever since that trip to the Capitol (in Washington, D.C.) I’ve wanted to install a similar model somewhere in Minnesota. The pandemic gave us an excuse to work on a family science project.”

Lilli participated in the family’s science project, designing the signs and zip-tying them to posts. She also helped write the script for the video and wore her old Halloween costume as an astronaut for recording. She was most surprised to learn that Pluto takes 248 years to orbit the sun.

“We hope the project checks a few boxes for our neighbors during the pandemic,” Bill said, noting that it is free, fun for all ages, educational and helps get people outside and moving. The Space Walk scavenger hunt will continue through the summer.

Bill concluded, “On the sign for Earth we excerpted one of my favorite quotes that celebrates our connectedness in this moment of social distancing: