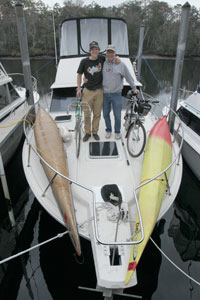 Nat and John Shepard aboard the Boudreaux. © 2011 Cascade Communications Inc.

Take two kayaks, two bicycles, a 34-foot-long boat and a mess of video equipment, drop it down on the Gulf Coast and you’ve got the right ingredients a local father and son need to explore (and document) the barrier islands, estuaries and other unique coastal environments between the Mississippi Delta and the Florida Panhandle.

That adventure began in January when John and Nat Shepard fired up the twin 350-horsepower engines of their rented boat, the Boudreaux, and launched 3rd Coast Connect, a multi-media project that follows their exploration of life—both human and animal—along the coast.

John Shepard is an associate professor and multimedia producer at Hamline University’s Center for Global Environmental Education (CGEE). 3rd Coast Connect is his semester-long sabbatical project. Media gathered during this trip will be used in CGEE’s Waters to the Sea educational programs, which explore water issues in various parts of the country, including the upper Mississippi River region, the Chattahoochee and Apalachicola rivers in Georgia, and the Trinity River area in Texas. The programs are used in grades four through eight in various school districts, Shepard said. The Dallas-Fort Worth  Independent School district uses the Trinity River program in its seventh-grade curriculum.

The original CGEE program, The WTTS: Upper Mississippi, was piloted at St. Anthony Park Elementary and Murray Junior High in 1999. It explores how human land use has impacted water quality throughout history in the Upper Mississippi watershed. The program uses historical characters, animation and interactive simulations.

Nat Shepard was in fifth grade at the elementary school when the program was piloted. His sister, Anna, was a seventh-grader at Murray. John Shepard was an active parent at both schools at that time. “I was involved in the SAP PTO and in supporting environmental education and service-learning programs at the schools,” he said.

When John Shepard approached his son last fall about  joining him on 3rd Coast Connect, Nat didn’t hesitate. A recent graduate of the University of Puget Sound in Tacoma, Wash., he was washing dishes in a restaurant in Tacoma and hadn’t found a full-time job.

“It didn’t take much pulling once he let the line out,” Nat said. “When my dad invited me, I almost immediately said yes without being very certain about the details, because at that time he hadn’t even secured a boat.”

The trip began in Pensacola, Fla., where on the first day, the two adventurers encountered a pod of dolphins that swam within inches of the stern of the boat. They continued to interact with dolphins on the first leg of the trip. Whenever they saw a pod rising to the surface in the distance, John Shepard said, the dolphins almost always came by the boat “to surf our wake and check out what we’re doing.”

The Shepards are maintaining a blog that chronicles their journey. In one post John Shepard describes the brown pelicans they’ve seen peering at them from pilings and buoys. Annother post was written after a visit to the oyster beds in Mobile Bay, an area that was indirectly but “catastrophically” impacted by last year’s BP oil spill.

The “wealth of wildlife” has been the highlight of the trip, John Shepard said. “The bird life has been constant, wintering loons—like us, snowbirds from the north—plus wonderful pelicans, egrets, great blue herons and lots of ducks.”

The project has been broken into two trips. “We started in Pensacola and went east along the Florida panhandle and slowly made our way back,” he said. In mid-February, John returned to Minnesota, while Nat stayed behind to work with a filmmaker his dad knows.

“I’ll be getting more videography experience and an idea of how to put together multi-media projects,” Nat said. “I don’t have much formal training.”

Father and son will launch the Boudreaux one more time the second week of March. They will head west and explore the Mississippi Delta and go on to New Orleans.

“I’m excited about that because [CGEE has] focused a lot on the Mississippi River,” John said. “So much of what people do in the Twin Cities and the agricultural areas in the Upper Midwest has a huge impact on water quality in the delta. There are really strong connections between our lives in Minnesota and the Gulf Coast. It’s something most people don’t think much about or aren’t aware of.”

The Boudreaux has enough room to accommodate intermittent visitors, including John’s wife and Nat’s mom, Suzanne Brust, and colleagues from John’s work at  Hamline.

The Shepards will be on the coast until sometime in May. You can follow their blog at thirdcoastconnect.wordpress.com.

Kristal Leebrick is the interim editor of the Park Bugle.