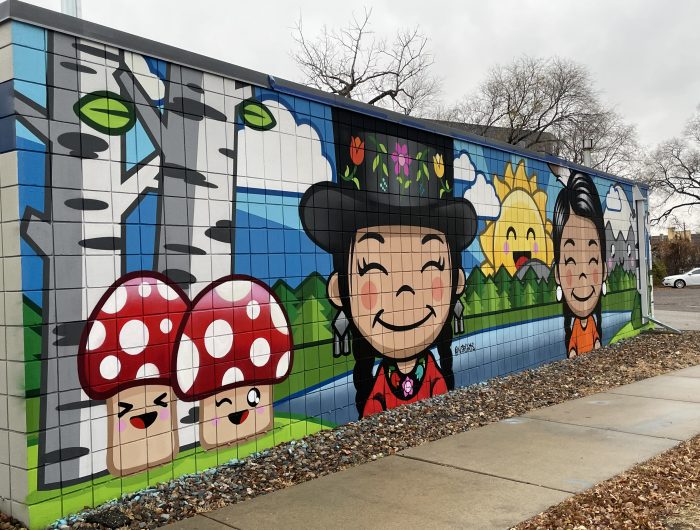 The 10th and final new mural of the fourth annual Chroma Zone Mural & Art Festival represents aspects of indigenous life and history. It was unveiled at an open house in late October.

And look for more murals to appear on the walls of various warehouse and industrial buildings in 2023 in the Creative Enterprise Zone in south St. Anthony Park.

Povi Marie is a Pueblo/Diné woman, raised in Tiwa Territory, also known as Albuquerque. Besides being an artist and a mother who homeschools her children, Povi Marie is an active member of and designer for nsrgnts, an indigenous brand, business and art collective that advocates for indigenous rights.

She painted her mural in the Kawaii style (a form of Japanese pop-culture, according to My Modern Met) that celebrates “cuteness” and positivity. This untitled piece, which was painted in partnership with Povi Marie’s life partner, Votan (also a muralist), pays homage to a larger, 3-story tall mural the couple painted in downtown Duluth (on the AICHO building) in 2017.

“One is wearing a red jingle dress, bringing awareness to indigenous relatives,” Povi Marie said. She added the other character is wearing an orange shirt, representing Native American children who were affected by the boarding and residential school system.

In a message to the Bugle, Povi Marie said,“The best thing we can give our little ones are safe, healthy environments to be children — that is something many of our relatives were unable to experience. I have so much hope for these little ones. They will be the positive change our communities need.”

Leifeld spent time talking with Povi Marie and Votan during the creation of the mural. Since the mural is on Terra Firma’s building, he said he feels a responsibility to share the artwork’s deeper meanings with the community.

“At first,” he said, “it looks like a cute cartoon, but after hearing the deeper meanings behind it, makes me have more affinity for it.”

Since debuting in 2019, the Chroma Zone Mural & Art Festival has introduced more than 40 murals in the Creative Enterprise Zone neighborhood. That area is located north of I-94 and south of Energy Park Drive between Highway 280 and Prior Avenue North.

The Creative Enterprise Zone, the nonprofit sponsor of the mural festival, also collaborated on another four local murals.

“We hope to announce details on the size and scope of next year’s artist selection process with our creative partner, Forecast Public Art, in January,” Casselton said.