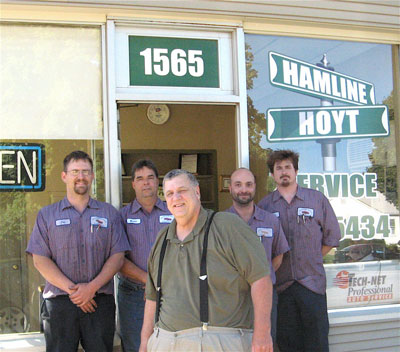 Fixing cars in Falcon Heights for more than 70 years

In the 1950s, five-year-old Steve Horazdovsky decided to emulate his dad by playing “service station man” and filled up the gas tank of the family car.

Unfortunately, he used the garden hose to do it.

Overcoming that early misadventure, Horazdovsky went on to own that station at the intersection of Hamline and Hoyt avenues in Falcon Heights himself.

Steve recounts that his father, Harry, discouraged his sons from following in his footsteps, although as it turned out, all five of them did so, at least for a time.

“Dad didn’t want any of us to get into the business because it was such a tough way to make a living,” says the only Horazdovsky still associated with the enterprise.

When brothers Earl and Harry Horazdovsky opened Hamline-Hoyt Service in 1942, Harry was only 14, so his 23-year-old sibling clearly was the boss. There were a number of challenges associated with starting up during World War II, including the fact that gasoline rationing was in force. And the work schedule was brutal, with the station open 6 a.m. to 6 p.m. Monday through Saturday and until noon on Sunday.

Their father, Edward, who was bankrolling the venture, questioned the brothers’ wisdom in opening a station “so far out of town.” Housing in the area was sparse and didn’t start filling in until after the war, but Como Park Lutheran Church already was well established and the Blomberg Grocery and Pharmacy had opened two years earlier. And there was streetcar and later bus service to the intersection, making it convenient for customers to drop off their cars and go to work.

Originally it was a two-bay Phillips 66 station, later Texaco and still later Mobil Oil. The fact that the Horazdovskys owned the land and building gave them some leverage in negotiating with the oil companies.

Earl left the business in the early 1950s and Harry, tired of the schedule, leased it to Herb Strandquist, becoming his employee for the better part of the next 20 years. In 1972, Strandquist retired and Harry resumed control. He was joined by Steve, who left the University of Minnesota after his junior year.

After Steve bought out his dad in 1982, Harry and his wife, Sally, retired to northern Minnesota. They were living in a care center in Brainerd when they passed away within months of each other not long ago.

Steve himself has been plagued by a number of health issues and is limited to handling the station’s books, although he is still on-site regularly and enjoys chatting with customers. Facing hip surgery five years ago, he hired Kevin Loftus, a Carquest Auto Parts sales representative, as station manager.

Horazdovsky said he’s been blessed by having top-notch employees over the years and has enjoyed watching some mature on the job, “boys becoming men,” as he puts it. Several young men from the neighborhood have worked at the station, a current example being Joe Solheid.

At first, the station made most of its money on the sale of gasoline, but by the early 1980s, mechanical work was accounting for 90 percent of the income. At that point, the Minnesota Pollution Control Agency issued a directive requiring that storage tanks over 25 years old be replaced and Horazdovsky decided to simply remove his and quit pumping gas.

Among the numerous improvements over the years were the addition of three more service bays and a major exterior facelift in 2000.

Overall, cars are much more reliable these days and may have twice the useful life they once did. While the station does fewer tune-ups and less transmission work now, because people keep cars longer, there’s more brake, exhaust and suspension repair. And the mechanics perform a lot of engine performance diagnostics using computer software.

The recent recession has been tough on Hamline-Hoyt’s business, but Horazdovsky said the past summer was busy and profitable and things seem to be coming around.

Through all the changes over the years, the one constant has been Hamline-Hoyt’s emphasis on customer service, Horazdovsky said.

“We explain what’s going on in layman’s terms, why we’re doing what we’re doing,” he said. “And if we see the potential for future problems—tires getting worn, that sort of thing—we’ll say, ‘You might want to think about dealing with that in a few months.’

“It’s all about helping people make informed decisions about what to do with their vehicles.”