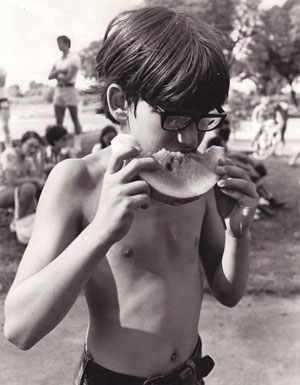 FLASHBACK: 65 years of celebrating the Fourth in St. Anthony Park

Flash from the past: David Lockhart gets ready to try the watermelon-seed-spitting contest in the mid-'70s. Bugle photo.

The Fourth in the Park, one of the great traditions in the St. Anthony Park neighborhood, has been called an annual Norman Rockwell moment. But unlike a Rockwell painting, which is a permanent snapshot in time, the Fourth evolves. Slowly, and not always noticeably, but as time changes, so does the neighborhood gathering. Here are some highlights from years past.

Getting the word out

Before the Park Bugle began publishing, most of the publicity for the annual event was via U.S. mail and a major blitz of poster-hanging up and down Como Avenue and in other neighborhood gathering spots. At St. Anthony Park Elementary School, Bob Hahnen’s patriotic-essay contest became a staple starting in the mid-1970s. Before the essay contest, each year a boy and a girl were selected from the sixth-grade class to serve as Uncle Sam and Betsy Ross at the July 4th activities.

The economics of the neighborhood changed along with the rest of the nation and by the mid-1970s the cabin up north and the three-day weekend started to offer an attractive alternative to the beloved Langford Park Day and attendance dropped. Creative event organizers enlisted the Knoblauch twins, Sue and Sarah, who with assistance of Fashions by Priscilla, created the “Don’t Go to the Lake” banner that hung for many years in the front of Stu MacIntosh’s Park Hardware store on Como Avenue in the weeks preceding the holiday.

Catering to the athletic set

Following the great American tradition of “if one is good, two must be better,” organizers tried to fill the entire day. The glut of baby-boom kids participating in activities at Langford Park became a target for an athletics fest at Murray Field and the Luther Seminary field. Baseball and softball teams played exhibition games against each other. This was followed by having the teams march in the parade in their uniforms. Despite the best intentions of the neighborhood adults, the gradual lack of youthful enthusiasm for arising early on Fourth of July morning led to the demise of this tradition.

A morning tradition that has thrived is the 2- and 4-mile race started in the mid-’70s by John and Kathy Magnuson. The neighborhood, past and present, still shows up at 8:30 a.m., along with a steady group of “outsiders” whose entrée to the Fourth in the Park came from this popular event.

Surviving photos from the 1950s and 1960s show that the central part of the parade was the kids of the neighborhood. Bikes, trikes and a lost part of growing up, chugs, were common in the parade. Chugs were wooden contraptions with wheels, sometimes primitive brakes and rope handles for steering. Some were tested on Bourne Avenue before the parade—one brother on Eustis Street looking for cars, while the other chugged down Bourne and into the wilderness of pre-Highway 280. All are still alive and well.

St. Anthony Park had the 1960s, with all of the angst of Vietnam, long hair, short hair, short dresses, hell no and hell yes. In 1976, the United States celebrated its bicentennial. I recall being a (long-haired) Langford Park worker doing pre-parade duty. In the spirit of the bicentennial a decision had been made to purchase small, hand-held American flags to pass out to the kids along the parade route. I still remember being taken aback by the fact that just about every “adult” that I passed by asked for a flag. (As a history teacher now, I recognize that there was a bit of psychological unification going on that year. It might be a good thing to see if that could happen now.)

Then, as now, the afternoon and evening of the Fourth of July celebration sort of blended together; one became the other, often in ways that seemed like time was moving in a different pattern.

The kid-centered activities in the ’50s and ’60s were all in the horseshoe end of the park, anchored by the old 20-by-40-foot shanty. The concession stand (space, inadequate) was there along with the bathrooms (the same: inadequate), space for the races (better) and space for setting up the fireworks (see above). A constant was the dulcet tones of Albie Dexter announcing the races, seemingly knowing every single person by name and managing to get extraordinary participation from kids, male and female, teens, young adults and even the “old” ones. (Remember how when you are a kid, anyone over 30 seemed just about 60?)

In the park proper, Igor Razskazoff’s Oompa Band filled the bandstand, Neil Christian’s 12-string guitar played out the melodrama of the unfortunate women who ingested a fly, and the AFS chicken barbecue helped to send and receive high school students with a flair for travel.

Greg Page thought that a volleyball tournament would be a good idea. He was right. Doc Robins taught a grateful group of neighborhood athletes the finer points of volleyball, a lesson that was both appreciated and passed forward multiple times. Andy Rygg and Eddie Bauer (yes, that Eddie Bauer, from Chelmsford Street) dominated the horseshoe tournament until Bill Bunting, Randy Quale, Bill Kroona, Dave Tonsager and another fellow put a stranglehold on that competition.

The fireworks were great. Shot off by the railroad tracks, they were indeed directly overhead. Albie  (the Herb Carneal of the neighborhood) announced and hundreds sat on picnic blankets. In a different environmental era, the park had indeed been sprayed for mosquitoes and that stuff worked (what else it did, is a different story).

Bands replaced the fireworks. Bill Paist and Stu Peterson volunteered to research potential candidates and for a number of years the Rocking Hollywoods made everybody honorary greasers, surfers and rememberers of Happy Days.

This year’s Fourth in the Park will be what it has always been: something magical and new for a lot of kids, a chance to reconnect for many others, and a legitimate reason for neighbors past, current and, we hope, future, to celebrate their shared community.