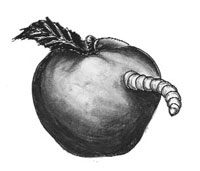 April Fools’ Day is right around the corner, and while you may be giddily planning to plant a whoopee cushion on your boss’s chair (unwise, by the way) or to loosen the lid on the salt shaker just before dinner, there are many food pranks that can brighten—or ruin—someone’s day.

There is a plethora of tricky treat ideas, from slightly devious meatloaf and mashed potatoes “cupcakes” to a downright cruel sponge “cake.” Yes, a fake cake, made out of a giant sponge.

What type of monster thinks of this stuff?

Treats should always be delicious, even when they are meant to deceive. Below are a few examples of sneaky goodies for your family on this April Fools’ Day.

Turn milk a cringe-inspiring shade of yellow with a few drops of food coloring trickled into the carton. No one will be the wiser until they pour it into their cereal. Ewww.

Transform the classic kids’ favorite with pound cake and a can of frosting. Cut pound cake into half-inch slices and toast lightly in a toaster oven until they turn a light golden brown. Once cooled, stack two slices and cut in half diagonally. Tint buttercream or white frosting by stirring in a few drops of yellow and red food coloring to achieve a shade of orange resembling American cheese. Carefully spread frosting on one slice, then top it with the other and gently press down. The frosting will ooze out a bit and look like melted cheese.

What’s worse than finding a worm in your apple? Finding half a worm in your apple. Use a sharp steak knife to bore a hole in a large apple, then insert a gummy worm as deeply as possible. Place the apple in your child’s school lunch for a few laughs in the middle of their day. Note: Do not make this too far in advance or the worm will get mushy. And mushy worms are not nearly as funny.

Using yellow cake mix, bake a cake in a 9-inch round pan. When cooled, remove from pan and spread top with seedless strawberry or raspberry jam for the sauce. Grate white chocolate with a cheese grater and spread over jam to create the cheese. Cut round circles from red fruit roll up sheets for the pepperoni. Voilà!

Alex Lodner is a freelance writer who lives in Como Park.