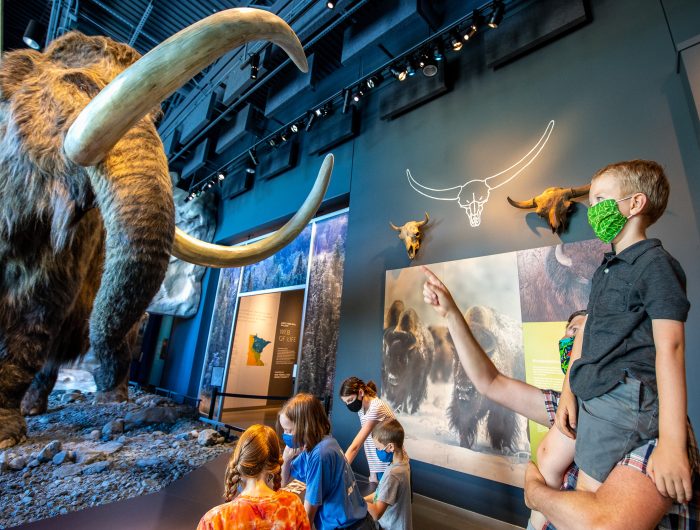 The Bell Museum, Minnesota’s official natural history museum, will celebrate its 150th anniversary in a wide variety of ways throughout 2022.

Located within the University of Minnesota St. Paul campus at 2088 Larpenteur Ave., the Bell Museum is in the heart of the Bugle’s neighborhoods. The Bell’s environmentally sustainable building and grounds are home to the Whitney & Elizabeth MacMillan Plane­tarium, world-famous wildlife dioramas and the family favorite Touch and See Lab.

Since the new building opened in 2018, the Bell has had over 1,000 volunteers, 250 undergrad student staff members and numerous international researchers, youth summer camps and visiting school groups.

“We are excited to celebrate 150 years,” said Nehwoen Luogon-­Bojkov, Bell Museum marketing and communications associate. “The Bell Museum and its collections are such a big resource not only for the past, but also for the future and future research.”

The Bell Museum’s extensive collections include more than 1.2 million specimens of wildlife, plants and fungi from Minnesota and around the world. “We’re excited to highlight our collections throughout this celebration year,” Luogon-Bojkov said.

Created by a Minnesota’s legislative mandate in 1872—just 14 years after statehood—and held in trust by the University of Minnesota, the Bell Museum’s mission is to “ignite curiosity and wonder, explore our connections to nature and the universe and create a better future for our evolving world.”

Its name comes from original financial supporter James Ford Bell. According to a 2018 TPT tele­vision special on the Bell Museum, “Windows to Nature: Minnesota’s Dioramas,” Bell was interested in natural history and making it accessible to the public.

Fast forward 150 years beyond 1872’s legislative mandate: “There’s a lot happening this year! We’re so excited to bring people back into the building,” Luogon-Bojkov said.

In late January 2022, a new exhibit, “Seeing Birds,” will kick off the year of special events.

“It’s an exhibit that really does speak to the Bell so much,” Luogon-Bojkov explained. “It integrates art, science and nature and it will really engage our visitors.”

As the celebration year unfolds, the Bell’s celebratory plans continue. The annual Space Fest will occur, in person, in February. April will bring the Statewide Star Party, with both virtual and in person elements to best engage Minnesotans from across the state.

The book, “A Natural Curiosity: The Story of the Bell Museum,” will be released in the spring. In July the museum will welcome acclaimed artist Luke Jerram’s “Gaia” installation. (Bell enthusiasts may recall Jerram’s enormous “Museum of the Moon” in 2019.)

At the end of 2022 the planetarium will unveil its third original Bell-recorded film, “Mars: The Ultimate Voyage,” a project produced with funds from NASA.

Even beyond its anniversary, the Bell Museum has much to cele­brate. In March 2021 the Bell Museum was named a Smithsonian Affiliate. That distinction allows the Bell to participate in long-term collaborative partnerships with over 200 museums, educational and cultural organizations around the country.

And in 2019 Bell was one of 51 museums in the country to receive a combined $4 million American Alliance of Museums Facing Change grant to build and maintain inclusive cultures and reflect the voices that diverse communities represent.

As a result of this grant, the Bell has distributed 9,000 summer science and nature kits and 7,000 mini museum kits to diverse communities across the Twin Cities through community partners to provide access to hands-on STEM learning, according to Holly Menninger, Bell Museum’s director of public engagement and science learning. She wants to invite all Minnesotans to the museum during this anniversary year, “We think there will be something for everyone—a program, an exhibit, an activity, a show—to connect to nature and the universe. It’s going to be a heck of a good time!”

Sarah CR Clark lives in St. Anthony Park and is a regular contributor to the Bugle.