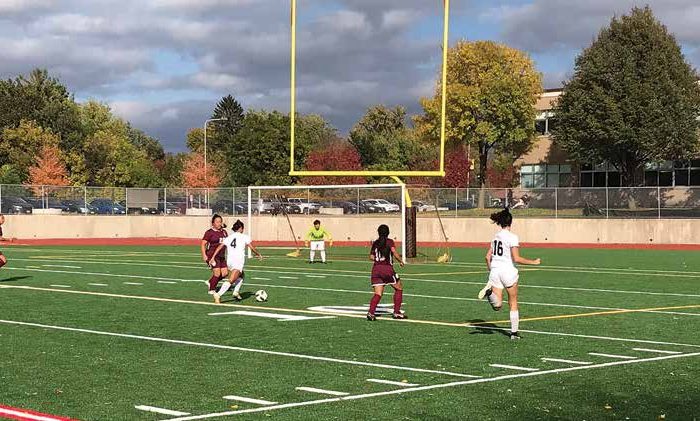 For hundreds of student athletes at Como Park and thousands across St. Paul, Aug. 12 marked the end of summer and the beginning of the new fall sports season.

During that time, team tryouts occur, practices are abundant, and competitive games are already underway. For Bugle readers, we offer a preview of what’s ahead:

Girls’ Soccer—The Cougars have produced winning records for five straight seasons, including the last three under head coach Kyle Johnson. This year, Hussein Mohamed is stepping up as head coach to lead an experienced varsity team.

Mohamed was a starting defender for the Cougar boys in 2011. Now, as an educational assistant at Como, with several years of assistant coaching for the boys, Mohamed is eager to guide the girls’ program, which will feature more than 50 players on three teams (varsity, JV and C team).

Varsity will benefit from the return of some outstanding seniors. Shar Too has been an All-State player since her freshman year. Rebar Htoo is a dynamic attacker and goal scorer. Tina Million is a reliable defender who helps spring the offense and is a consistent vocal leader.

Mohamed put together a challenging varsity schedule, with non-conference games against traditional section powers and larger schools. The team is ready for the challenge of competing at a higher level and to prove it can improve upon last year’s second-place finish in the St. Paul City Conference.

Boys’ Soccer—With more than 80 players in the program competing on four teams (varsity, JV, B and C teams), Jonah Fields is excited to serve his sixth season as head coach. “We want to continue to define our program with work ethic and first class actions,” Fields said.

For the varsity, junior Kevin Iragaba is expected to play a key role as a center back and provide a calm, positive presence for the defense. Junior Emmanuel Molinos returns as goalkeeper. He has started 30 games for the Cougars in the past two seasons and has nine career shutouts. ely, Senior Abdihamid Mire will have the opportunity to use his offensive creative flair and technical skill in a forward position.

There are plenty of dates on the home schedule for the community to come out and see the team in action, including the Rice St. Rivalry Game vs. Washington on Sept. 11. All fans will get a free hot dog and see a spirited, high-energy match.

Cross Country Running—Coach Tim Kersey will lead the Cougar boys’ and girls’ teams for a seventh season. The teams train together and have an extremely supportive culture, fostered by captains who are selected by teammates based on experience and leadership qualities.

Boys’ captains for the 2019 season are Kalid Ali, Alistair Pattison and Nicholas Jacobsen. Girls’ captains will be Justine Wulff, Claire Olson and Saylor Landrum. Historically, both Cougar cross country teams finish third out of the seven schools in the St. Paul City Conference. Finishing in that position or higher is certainly the goal once again this season. The teams have decent depth and the top runners trained consistently over the summer. Big meets on the schedule include the Roy Griak Invitational and the Section 4AA Meet, both of which will be held on the U of M golf course.

Volleyball—The Cougars varsity finished fifth out of seven teams in the 2018 St. Paul City Conference standings, after finishing third in 2017. If this year’s team develops chemistry, a top-half conference finish is within reach. The first home match will be a big test versus the defending champs from Highland Park.

Girls’ Swimming—The Como swimmers form the base of a cooperative team with Johnson High School. Together, the squad will aim to improve all individual times over the course of the three-month season. Cooperative teams are common in St. Paul as Highland Park partners with St. Paul Academy and Washington pairs up with Humboldt.

Girls’ Tennis—The Cougars will search for new doubles combinations and top singles players as they compete in a round-robin conference format. Non-conference opponents include both suburban and private schools, with the first home match on Aug. 22 against New Life Academy.

Football–The Cougars’ collective results over the last two years in the Twin Cities Red District, including their 6-2 record in 2017, led to a new placement in the highly competitive Twin City Blue Division. The schedule is filled with top-tier teams from St. Paul and Minneapolis such as Central, Johnson, Highland, North and Washburn. n