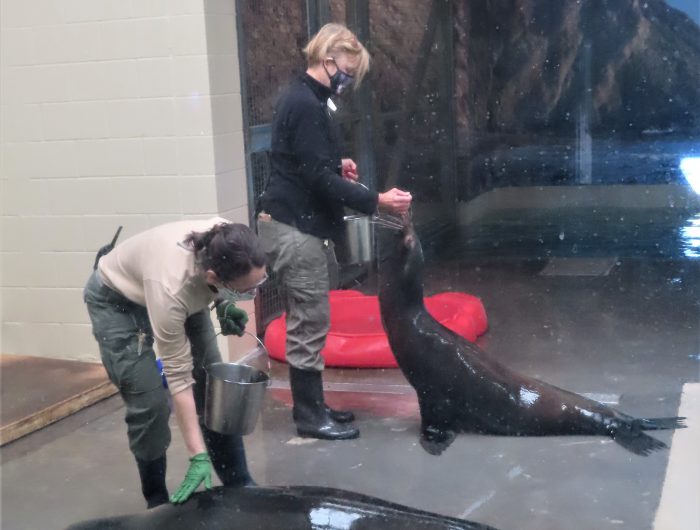 Fans of Como Park Zoo’s Sparky the Sea Lion won’t have to wait much longer to see the popular pinniped in his new digs.

Como Harbor, whose originally planned opening was delayed about nine months because of the COVID-19 pandemic, is set to be unveiled to the general public on June 3. A ribbon-cutting ceremony is planned for 10 a.m.

The project was primarily funded with a $15 million bonding appropriation from the 2017 Minnesota Legislature. The remainder of the $21 million project was raised by Como Friends, Como Park Zoo & Conservatory’s nonprofit partner, along with individuals, corporations and foundations.

The exhibit space depicts the northern California coastal habitat of seals and sea lions. It features year-round viewing (with indoor and outdoor saltwater pools), underwater viewing (similar to the zoo’s Polar Bear Odyssey) and an up-close look at the animals and their care and training. The addition also includes a shaded amphitheater, new restrooms, a restaurant and a picnic area. All are wheelchair accessible.

Como Harbor replaces Seal Island (originally Monkey Island), built in the 1930s for monkeys as part of a federal Works Project Administration effort. That facility was later converted for use by seals, along with the addition of an amphitheater. The old amphi­theater’s pool could not be used with saltwater and sat empty each year over the winter.

“We had originally planned to open Como Harbor in the fall of 2020,” said Matt Reinartz, Como Park Zoo & Conservatory marketing and public relations manager. “But with the uncertainty of COVID, we chose last summer to delay that opening for when the community could more come together and celebrate in June.”

The new amphitheater is the same size as the former one and will be able to seat up to 1,000, once it is deemed safe to do so under COVID guidelines.

“We are planning to open habi­tat so that guests can see the animals in their new space and have another celebration later this summer/fall for the return of full-on shows,” Reinartz said. “We hope at that time we can fill the seats.”

The seals and sea lions—which are pinnipeds—will have access to Como Harbor year-round, Reinartz said.

The new facility will have some new faces. Over the past year, Nico, a sea lion, harbor seals Killian and Kash and Atlantic gray seals Stanley and Wallace joined sea lions CC (the current Sparky), Subee and Poppy.

The Aquatic Animal Building, which has undergone renovation, will provide their indoor living area, along with the penguins and puffins.

“The Sparky Show,” which debuted in 1956, remains a popular feature at the zoo. When will it return?

“We hope once the animals get acclimated to their new home,” Reinartz said. “There will likely be times when visitors will see zookeepers working with the seals and sea lions as part of the show.”