For Cougars, at last, There’s no place like home! 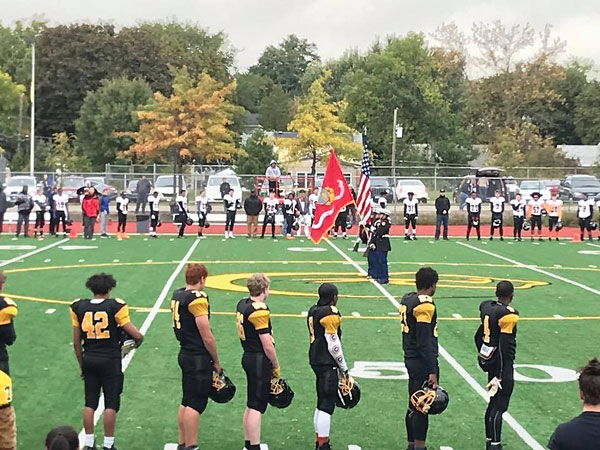 Players stand as the color guard presents the colors for the anthem at Como Park’s first-ever home, Homecoming game. Photo by Tina Weins.

Homecoming week at Como Park High School has always had a strange feeling for the traditional culminating event. After sprinkling fun and festive activity into the school week, football players would ride a bus to a rival school in order to play the homecoming football game, most often at Central High School.

For 39 years, that reality frustrated alumni, students and staff who believed that homecoming should be celebrated at Como, on home turf.

Then on Sept. 29, it happened:  The Cougars played their first homecoming football game at the Como campus to the delight of hundreds of smiling supporters.

Although the Cougars lost to Minneapolis South 33-14, the events on the new Como Field filled the school community with a special sense of spirit.  Just hosting the game on campus spurred several activities coordinated by the Como Park Booster Club.

Booster Chairwoman Anne Levin and Treasurer Laura LaCroix-Dalluhn worked with the club members and Como staff to pull off a parade in the neighborhood on Saturday morning.  That event was followed by a picnic and activities on the school grounds, catered by local food trucks that offered their specialized fare before and during the game.

“The Booster Club works to build community,” LaCroix-Dalluhn said.  “With the first-ever hosting of homecoming here at school, we wanted to invite community members to experience this great new field and celebrate with our amazing students and staff!”

Tina Weins is another Como Park Booster Club member and a 1996 graduate of the high school. Back then, she was Tina Cook and eventually married her high school sweetheart Brian Weins, who graduated from the same class.

Tina and Brian’s daughter Anna Weins, a sophomore, is now the starting goalie on the varsity girls’ soccer team.  Anna’s grandmother, Jackie Fellman, was a member of Como’s first graduating class in the spring of 1980.  As a third-generation Cougar, Anna’s involvement at homecoming was a source of great pride for her family.

Anna played her flute with the pep band on Saturday and played in the homecoming soccer doubleheader on Friday night.  The boys’ soccer team hosted Johnson for its homecoming game at 5 p.m. and rose to the occasion with a 7-0 victory. The girls kicked off at 7 p.m. under the lights and produced a convincing 9-1 win.

Tina and Brian enjoyed watching Anna play in the soccer match on Friday night and then taking in the football and festivities with fellow parents, alumni, students, Como staff and community members.

But the moment was also bittersweet. “I couldn’t help but think back to all of my soccer and football playing friends who were denied having the same moment,” Tina Weins said.

“At the same time, I am thankful that the community finally got this right and my daughter gets to have this moment.  There is nothing better than watching your kid take the field, under the lights with the school logo in the center of the field.”

Leonard Franco, a member of Como’s first-ever football team in the fall of 1979 (and Como’s Athletic Hall of Fame), was also happy for Como’s real homecoming. “It was great to see homecoming football on the new field.,” Franco said. “It’s important for the kids to have their own field that can feel like their home.  Kids seeing that field, growing up and seeing it in your own back yard, it makes the community stronger.”

Cougar athletes also voiced gratitude to have their own home field for homecoming.

“It’s important especially to the players because we were finally playing our homecoming game at our school, our home,” said Khyri Lueben, a Cougar senior wide receiver and cornerback.

“It felt like it was ours,” added Alonte Johnson, another senior and outside linebacker.

Gianna Gabrielli, a three-sport senior athlete at Como, plays softball, hockey and soccer.  Her parents, Doug and Julie, are also Como alumni from the class of 1984.  The Gabrielli family shared similar sentiments as they stood together on the Como turf Friday night during the halftime ceremony honoring senior families.

“Going to Central’s Griffin Stadium for homecoming football games all these past years never felt right,” Gianna Gabrielli said. “Playing games on the new field gives us a great sense of pride in our school.”

A change of Como A.D.s

One longtime St. Paul educator who appreciates the community’s Cougar pride is Nate Galloway.  After a career of more than 40 years in St. Paul Public Schools that included 20 years as the athletic director at Central, Galloway retired in 2011.

However, Galloway graciously stepped out of retirement to be interim athletic director at Como in December 2015.  Since then, Galloway has helped navigate transitions, facility challenges, and run the department.

“I’ve enjoyed my time working at Como Park High School,” Galloway said. “Students have been enthusiastic about committing to be better student athletes,”  “ Cougar Pride is about never giving up.  There’s a great spirit here around the school and community.”

On Oct. 22, Galloway will retire again and Koua Yang will take over as athletic director.  While Galloway has helped train the new A.D. in operations and procedures, Yang needs no introduction to Como.:  He’s a Cougar from the class of 1994.

Yang was a stellar student, wrestler and tennis player at Como.  He’s been teaching and coaching at Harding High School since 2000, inspiring students in social studies classes and coaching boys’ and girls’ tennis teams to multiple conference championships.

“It is an incredible honor to come home to Como Park after so many years,” Yang said.  “Some of my most formative years as a young adult were forged by the experiences at Como Park. I’m excited to give back as the new athletic director.” 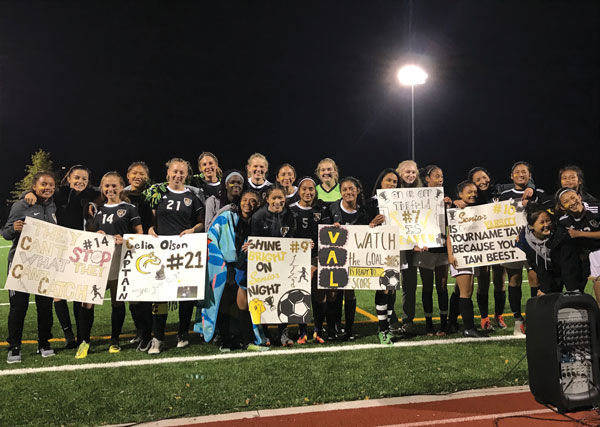 Como hosted homecoming soccer games on Friday night, Sept. 28. The girls’ varsity
team played under the lights after the boys’ game, and honored the seniors at halftime.
Photo by Eric Erickson.