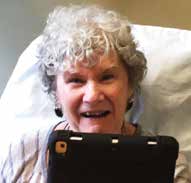 For nursing homes, the daunting challenge of taking on COVID-19

On a February visit to St. Anthony Park Home, Terrie Zarembinski trimmed her mother’s hair. It was a ritual that 76-year-old Kathy DeBace enjoyed, even through the haze of Alzheimer’s disease. Since then DeBace has tested positive for the coronavirus. But as of mid-May was showing no symptoms.

“That was the last time I saw her in person,” Zarembinski said.

When COVID-19 arrived in Minnesota, nursing homes closed their doors to visitors in hopes of keeping the virus from infecting vulnerable older residents. The near impossibility of that task is now apparent as local long-term care facilities are grappling to keep a lid on coronavirus infections among residents and staff.

“I’m absolutely terrified that I could be in a situation like the facilities that have had 20 or 30 deaths,” Barker said. “We’re doing everything we humanly can to prevent it. But I haven’t been able to convince myself that it couldn’t happen.”

“The pressure is immense,” he added.

By early May, more residents had tested positive and the 225-bed skilled nursing facility has sustained six resident deaths as of about May 17. Across Minnesota, about 80 percent of people who die from COVID-19 lived in long-term care centers.

“I thought maybe, just maybe, we could have avoided COVID,” Johnson said. “I had to have that mindset. We had to try. We swung for the fences.”

Back in March, both local centers started screening staff for symptoms at the start of every shift. Employees must wear face masks and, more recently, goggles. Residents stay in their rooms and no longer gather for meals in the dining rooms or for worship or movies.

To soften the isolation, a Lyngblomsten chaplain leads sing-a-longs on closed-circuit television. At St. Anthony Park Home, Barker puts on impromptu performances, playing “Claire de Lune” on double bass while his activities manager accompanies him on a piano she rolls down the hallway.

Zarembinski cherishes the brief virtual connections with her mother. “We get to see her face and we see her smile,” she said. “She seems content.”

One of the hardest aspects of the virus crisis is separation from family. People who enter nursing homes often are in their last years of life. Decline and death are not unexpected. But being unable to be with loved ones is new and a sorrow-filled challenge.

Bill and Susan Kephart moved from California into apartments on Lyngblomsten’s campus seven years ago to be close to family. After a series of strokes, Bill moved into the care center 18 months ago.

Susan visited Bill nearly every day, as did Susan’s daughter and Bill’s stepdaughter Sara Veblen-­Mortenson, who lives just a few blocks away.

After Lyngblomsten restricted visits, Susan could no longer visit Bill and Sara couldn’t visit either of them. They texted and talked on the phone. Veblen-Mortenson dropped off muffins and curries for her mother and sent daily letters to her stepdad with a joke to share with staff.

In the care center, Bill, 92, watched opera on the closed-­circuit television and won $1.50 in “hallway bingo,” which he played wearing a mask and sitting in a chair in the doorway of his room. Staff made sure he got his 4 o’clock Scotch.

“He was coughing a little bit,” said Veblen-Mortenson. “But he thought it was allergies”

To be on the safe side, Bill was tested for COVID-19. Staff were shocked when he and seven other people on his unit tested positive. Lyngblomsten had planned initially to isolate COVID-19 patients in a separate wing, but given the numbers and location, a decision was made to keep residents in their rooms and cared for by designated staff.

Within days Bill had developed a fever and aches. The nurses told the family that his prognosis wasn’t good given his underlying health. Family members brought him flowers and stood below his second-floor window holding up a sign as a nurse pulled back his curtain so he could see them as they talked on the phone. He didn’t want to talk for long and over the next days his energy waned.

“We brace ourselves for when he might not be able to talk on the phone anymore,” said Veblen-Mortenson. “They’re doing everything they can to keep him comfortable. We just feel so helpless. As press time, Bill had grown weaker.

“We’ve faced his mortality,” she continued. “But this puts a whole new spin on things. How do you support him and love him in this process? You know you have no opportunity to be with him at the very, very end. It’s so hard. It’s awful. It’s terrible.”

Susan, 87, struggles to be philosophical. “I’m ready for whatever happens,” she said. “We’ve been married 45 years. It’s been a really good marriage. I’m grateful for what we’ve had. It’s not a great way to end your marriage. But it is what it is.”

Both Veblen-Mortenson and Susan said they appreciate how much information Lyngblomsten is sharing through emails and phone calls. Both centers have provided information about positive cases.

Maja Beckstrom is a journalist/writer and a resident of St. Anthony Park.