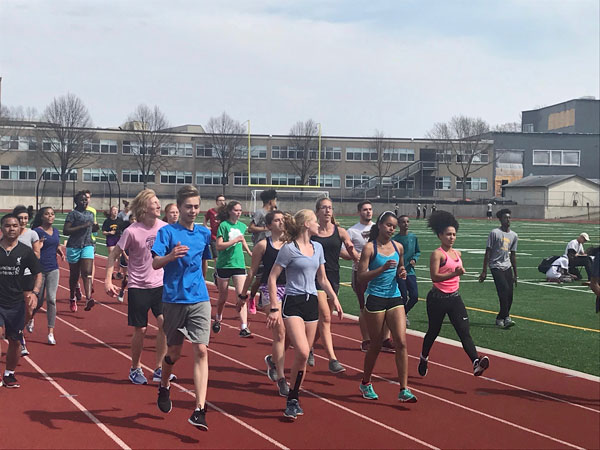 One common theme runs through each of the 45 individuals in the Como Park High School track and field program: the desire to improve.

The Cougars believe that individual improvement is most likely to be achieved with encouraging teammates. While track is primarily an individual sport with individual competition, a support network that trains together, endures challenges together and cheers together serves a springboard for success.

Regardless of talent, experience, gender or event, Como track and field participants are part of an inclusive environment. Some freshmen are trying track for the first time. Some seniors have goals of winning conference titles or to qualify for state.  There is a welcoming space for both ends of the spectrum and everything in between.

Cougars warm up at practice after school on April 30. The Cougars have 45 students in the program this season.

Senior Madyson Sklar has been running sprints for Como since she was in ninth grade. She appreciates the relationships she’s had through track and how her own role has evolved.

“I enjoy being a leader and encouraging teammates. I can say, I know this workout is hard, but we have to pull through because it’s going to show in a meet,” Sklar said. “I like making connections with people through track that will last a long time.”

In addition to the 100- and 200-meter sprints, Sklar does the triple jump and is part of the 4 x 100 relay team. The relays require cooperation and trust between teammates as they pass the baton.

“We have to have a good bond and communicate to make a good handoff, so it’s really about being connected,” Sklar said.

It appears that Sklar’s younger relay teammates feel the connection. Freshmen Wynter Cross and sophomores Emma Wolters and JaShawna Baker combined with Sklar to take first place in the Cougars first triangular city meet of the season.  They’ll try to keep improving the efficiency of their exchanges and lower their time as the season moves ahead.

After her senior track season and graduation, Sklar is set to study social justice at Drake University in Des Moines, Iowa.

Florance Uwajeneza is another Como senior who has thrived. A former city champ in cross country, Uwajeneza finished second in both the 1600- and 3200-meter races in the conference finals last year.

“Track is amazing. I’ve made friends and I’ve met people from different cultures,” said Uwajeneza, a Congolese native who moved to the U.S. from Rwanda just shy of five years ago.

“My teammates are always there for me. And track has made me more disciplined and better with time management,” she said.   Uwajeneza has been battling injuries recently, which has made staying healthy one of her goals. If she does, top-tier finishes in the city and section meets are possible.  Next fall she will be studying and running at Iowa Central Community College in Fort Dodge.

Senior Lumin Johnson is a charismatic and vocal leader who has been part of Como track throughout his time in high school. Johnson spends a lot of time on field events, specifically “the jumps.” He finished fifth in the conference long jump last year and sixth in the technically challenging triple jump.

“I like seeing progress, especially the jumps because I can see the numbers and see the improvement. You can see the hard work pays off,” Johnson said. “I like the competition, too. Every time at a meet I want to beat the guy that just jumped a little better than me. Then I jump better than him, and then we just go back and forth.”

Johnson also runs the 400 meters. He’s a valuable point-earner for the Cougars in every meet. More than that, he’s a captain who demonstrates a strong work ethic for an up-and-coming young nucleus of talent. Johnson will study at Dakota State University in Madison, S.D., and play football there next fall.

Como has one defending city champion on the boys’ side and that would be senior Lukas Walton, who won the St. Paul City Conference title for the 300-meter hurdles in 2017. He also does the 110-meter hurdles, the high jump and a relay. His senior season is off to a special start.

At the Mounds View Invitational on May 1, against the host school and other strong teams such as Stillwater, East Ridge, Central and Johnson, Walton earned the Outstanding Hurdler Award. He also had a first-place finish in the 300 and got second place in the 110.

Winning is fun more often than not, but Walton also enjoys track for other reasons.

“We fight through tough workouts together as a team and build strong friendships. I like the determination,” Walton said. “I like how everyone has respect for each other in the sport. There is good camaraderie, and I’ve gotten to know other kids from different St. Paul schools by competing against them.”

It will be interesting to see how far Walton can go in his hurdling events this season.  Beyond that, he’ll continue track at the next level. Walton will attend Bethel University and will run for the Royals in Arden Hills.

In a few weeks, the 2018 Como Track season will conclude. The seniors will be graduating, and yesterday’s underclassmen will transition into veteran leaders.  While the kids come and go, the coaches remain the same. Roy Magnuson and Marvin Rouse have been the constant.

“There aren’t many relationships in your life that are 36 years,” Magnuson said. “It has been quite wonderful. We have enjoyed the kids. They are always the reason that all this works.”

Fortunately, the relationships and takeaways from the Cougars Track and Field team won’t end when the season does. The lessons learned are long-lasting and provide perspective for navigating life.

“One of the joys of track is that you get to have two races,” Magnuson said. “One to see who finishes first, second and third, and always the one with yourself that you can always win.”