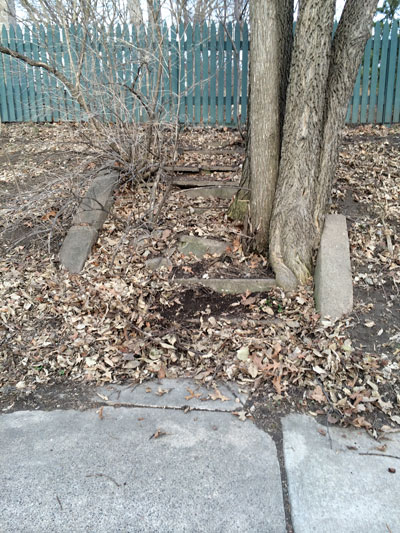 I often walk my dog past an empty lot in St Anthony Park, where 1468 Raymond Ave. once stood. The concrete stairs leading off the front sidewalk are still there, a tree growing in their midst, but the house is long gone and the lot has been incorporated into a neighbor’s yard.

My mother was born in that house on Aug. 9, 1919. My grandparents lived there while their permanent residence, designed by my Norwegian grandfather, the architect Magnus Jemne, was being built on the corner of Mount Curve Boulevard and Sargent Avenue in St. Paul.

My grandmother was a second-generation German-English St. Paulite named Elsa Laubach. Under her married name, Elsa Jemne was a painter of sufficient stature to have had one-woman shows at the Walker Art Center and, in the ’30s, she got commissions to do about a dozen Works Progress Administration (WPA) murals. (Her murals in the old Stearns County Courthouse, the old St. Joseph’s Hospital in St. Paul, the old NSP building and the old Ladysmith post office in Wisconsin all disappeared when the buildings housing them did; her two surviving murals are in the Minneapolis armory and the Ely post office.)

Elsa and Magnus collaborated on the Women’s City Club—now called the Jemne Building—at Kellogg Boulevard and St. Peter Street in downtown St. Paul, and on their two daughters, one of whom was my mother.

Mom married Dad and moved with him to Ithaca, N.Y. (where my brother was born), then to Madison, Wis. (where I was born), and then to Denver. They finally settled, when I was 3, in Norman, Okla., where Dad was an English professor at the University of Oklahoma.

Thus did I find myself every summer—and some winters—between 1953 and 1963 traveling to St. Paul to stay for a chunk of time with my grandparents. It’s an understatement to say that these trips were the high points of my young life. The magic would start on the night we were to leave. My brother and I would go to bed at the normal time and then be awakened at about 11 p.m. to make a groggy, dreamy 30-mile drive to the Chickasha train station, where we’d board the Rock Island Rocket at midnight. Although it hadn’t been written yet, I felt like the kid in The Polar Express. We’d hit Kansas City in midmorning, and after passing through Mason City, Iowa, and Albert Lea, Minn., we’d roll into the Union Depot in St. Paul anytime between 6 p.m. and midnight.

My decade of train travel coincided with the decline and disappearance of private passenger railroads, and aboard the ironically named Rock Island Rocket there was a lot of evidence of decrepitude, from the seat upholstery to the rails to the engines to the rolling stock. The dining car was run by the same dignified gentleman the entire time, he and his dark blue suit growing shabbier with each passing year.

To a kid from the hot, dry, flat, red-dirt plains of central Oklahoma, Minnesota was Shangri-La: The weather was cool, the people talked with a mysterious almost-foreign accent, the neighborhood children I hung with were above-average, and there were lots of trees and even more lakes. And my grandparents’ house and grounds were as different as could be from our four-square Oklahoma house and dirt yard. The main floor was dominated by the exotica of Elsa’s studio and Magnus’s drafting office, and 212 Mount Curve saw a steady stream of eccentric and notable artists such as painters Clement Haupers and Clara Mars and printmaker George Resler, as well as Maggie’s poker-playing buddies—quirky personages all, who likely wouldn’t have even been allowed into the state of Oklahoma.

A walk down the hill took one to the Mississippi River, and a walk up the hill to King’s Pharmacy, on the corner of St. Clair and Cleveland avenues, which had Chum Gum (three sticks for a penny), Jujubes and Pine Brothers cough drops—none of which was available in Oklahoma.

What was not to love?

As a bonus, my grandparents owned a cabin up north (which my nephews and I now own). It was designed and built in 1931 by Magnus, and I’ve got pictures of him and another man using hand tools to construct it. They built it on land homesteaded by my sad-sack Great-grandfather Laubach in 1917. I have the original homestead application receipt from the Department of the Interior in Duluth, which shows that he paid a $5.31 fee for 40 acres, 1,400 feet of which bordered the eastern shore of Big Sandy Lake in Aitkin County. It was the smartest thing the poor man ever did.

I loved everything about Minnesota and, after stints as a musician in Arkansas, Nashville and Oklahoma, I did the inevitable on June 6, 1974: I loaded a 1965 Volkswagen camper with all of my possessions and three cats and moved to Minnesota.

And so it is that 40 years later, I’m wondering if it might not be time for me to just go ahead and apply for Minnesota citizenship. I don’t quite have the accent down, but I think I meet all of the other requirements.

The steps leading to where 1468 Raymond Ave. once stood.