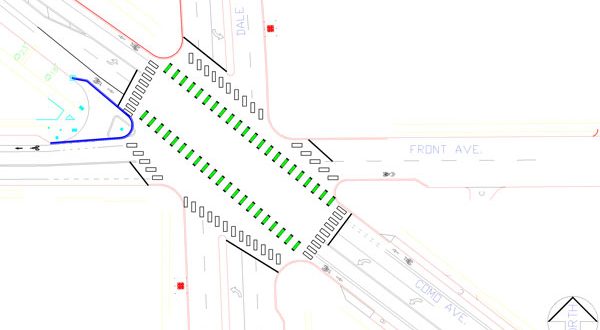 Four Como-Dale-Front Projects get thumbs up from District 10

The city’s proposed projects in District 10 include higher visibility striping for crosswalks, painted extensions of the Como Avenue bike lanes through the intersection (green) and eliminating the dedicated right-turn lane from Como onto westbound Front Avenue (blue).

The District 10 Como Community Council voted Jan. 16 to support four of five infrastructure projects that the city of St. Paul is proposing for the intersection of Como Avenue, Front Avenue and Dale Street. The projects are part of a $350,000 Commercial Vitality Zone initiative that the St. Paul City Council authorized in 2015.

The District 10 board voted to support:

The board did not support a proposal to eliminate the dedicated right-turn lane from southbound Como to westbound Front. That proposal would replace the lane by expanding the existing pedestrian island and shortening the crosswalk on Como.

The board’s actions came after it conducted an online survey that received more than 525 responses. Details of the survey results and of the proposed infrastructure projects can be found on the District 10 website, www.district10comopark.org.