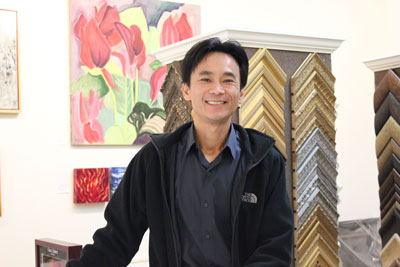 Khanh Tran in his Frame by Frame gallery in the Dow Building on University Avenue. (Photo by Kristal Leebrick)

When industrial supplier Fastenal vacated the storefront in the Dow Building, 2242 University Ave., Khanh Tran moved his frame shop out of a quiet corner of the building and into the space. He also expanded his business to include an art gallery.

Frame by Frame: Dow Art Gallery and Picture Framing now features the work of many of the 30-plus artists who have studios in the building. Tran hopes to bring in more local artists and enlarge the space. His gallery formula is unique, he says: Instead of taking a commission from the sales of the art, he charges the artists a flat rate to display their work. When the art sells, the artist gets 100 percent of the sale.

Tran has been framing art in the Dow Building for four years. He grew up in Apple Valley and began framing to make ends meet while attending college. He opened his first frame shop in the Seward neighborhood of Minneapolis in the late 1990s, then moved to Billings, Mont., where he operated a frame shop for four years before moving back to the Twin Cities in 2008.

With the Green Line running outside his gallery doors, he’s hoping the new transit system will bring people to this part of University Avenue to explore and to shop.