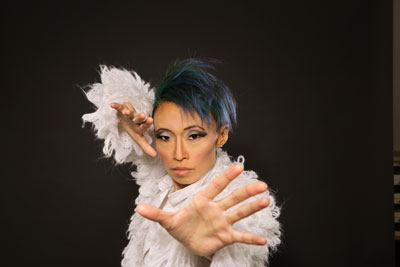 From a Scudder Street patio to the Guthrie

Mayda Miller’s first stage was a backyard patio on Scudder Street in St. Anthony Park, where her family and neighbors gathered each August for the annual National Night Out celebration.

Those summer parties included a potluck, a visit from the city police or fire department complete with flashing lights and tours of their vehicles, and a talent show starring just about every kid on the block.

“All the kids did it,” the Twin Cities pop-funk artist said. “I think that might have been a good part of where I got my performance interest, because it didn’t matter what you did.”

Miller’s first act on that makeshift stage was a taekwondo demonstration at age 8 or 9.

She recounts that experience in her upcoming play “DeMayda’d,” which she will debut in two performances in July at the Guthrie Theater’s Dowling Studio. The shows are at 7:30 p.m. Friday and Saturday, July 10 and 11.

The one-woman performance is “an unraveling of me,” she said, “the unpacking of who I am to this point.”

It’s her story of growing up as a Korean adoptee in Minnesota and how she’s dealt with the confusing feelings that comes with that “no matter what the circumstances are,” she said.

Miller was adopted as a baby from Korea by Sandra and Gordon Miller in 1984. She grew up in St. Anthony Park, attending kindergarten at St. Anthony Park Elementary School and grades 1-8 at Capitol Hill Magnet school, where she met a group of girls who would form her first band: the Sugar Divas.

“Some of us had known each other in first or second grade,” she said. “We thought it was the coolest thing. We got our friends to come and hear us practice—a bunch of giggly, giddy girls. But then we got serious.”

The Sugar Divas played throughout their high school years, which they spent at St. Paul Central, a place that she said helped “foster a lot of creativity.”

“There were so many musicians and artists and writers at Central High School. It was easy to find a bunch of friends and put on concerts and record music.”

She counts as her mentors the rap band Heiruspecs, who were seniors when she and her bandmates were freshmen.

The Sugar Divas played “at any venue we could legally play at,” Miller said. That included Grand Old Day in St. Paul, First Avenue and 7th St Entry.

When they played the Uptown Bar in Minneapolis, they had to wait in the parking lot until they were on.

“They only let us come on stage to play and then kicked us right out,” she said. The band frequently needed a chaperone to play at some of the venues and that chaperone was often bassist Jessica Hartnett’s older brother, Josh, now a well-known Hollywood actor.

“He was cool enough to let us hang out with him and he was very supportive of us,” she said.

The Sugar Divas split up after the members headed to college. Miller attended the University of Minnesota, where she received a degree in communications.

Since then, she has released two full-length albums and writes jingles for a variety of businesses in the metro area. Her work includes the signature blog song for KARE11’s news, Target’s 2014 back-to-school ad and the jingle for MyTalk 107.1 FM’s the Weekly Dish with Stephanie March and Stephanie Hansen.

In January, she toured Korea, and while there, met her biological parents. “DeMayda’d” is in part “a reaction to my experience of meeting my parents and going through adoption.”

Despite growing up in a supportive adoptive family, Miller said that as an adoptee, “you feel alone. You feel you are the only one. You feel secluded. It’s very personal,” because no matter what the circumstances are of the adoption “you are ultimately given away, and it’s not by choice. Whether it is for good or bad reasons, it’s pretty much saying you are not wanted.”

Everyone has different experiences, she said, and many people choose creative outlets to deal with the emotions of being an adoptee. “There are tons of playwrights and artists, painters, musicians who are Korean adoptees because that’s a safe way to let out emotions, to deal with the whole experience. I think most of my inspiration has come from my adoption experience.”

“DeMayda’d” is being directed by Randy Reyes, artistic director for Mu Performing Arts. Miller hopes to see the play tour outside of Minnesota after its debut.

To buy tickets go to guthrietheater.org and click on “Plays & Events” or call the Guthrie box office at 612-377-2224. To learn more about Miller and her work, go to imaydasong.com.