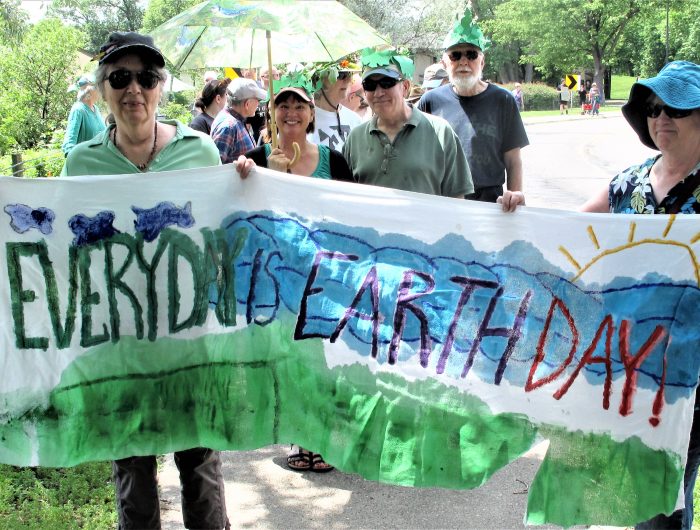 From the Desk of the Editor 

As the Bugle went to press for July, the question of whether more than 150 trees would get axed to accommodate road reconstruction in St. Anthony Park came to crashing end.

On June 11, several hundred citizens marched on Cleveland Avenue to protest Ramsey County’s plans to begin June 14 to take down the first trees along Cleveland Avenue, from Como Avenue to Buford avenues, as part of the construction project.

“Many residents are distressed about the possible loss of so many mature trees,” said Margot Monson, a St. Anthony Park resident and one of the marchers.

Meanwhile, the St. Anthony Park District 12 Community Council filed a request on June 13 with the state Environmental Quality Board asking for an Environmental Assessment Worksheet on the project.

Specifically, the council asked that “the removal of any trees as part of the Project—not commence and/or continue until a final determination is made on the present petition.”

However, the next day, June 14, the county proceeded with the project and began taking down trees. A week later, the Ramsey County Board rejected the citizens’ EAW petition, declaring that its legal counsel said the project was not required to undergo an environmental review because, in part, it was too small in scope.

That this project generated such a public outcry was evidence that Ramsey County was remiss in not keeping the neighborhood better informed on changing plans for the project. In a word — dropped — the county dropped the ball.

District 12 Community Council organizer Jessica Willman said the ultimate number of trees to be removed took neighbors by surprise in spite of the fact that many participated in early phases of the county’s planning process.

(Originally, some 60 to 70 trees were envisioned for removal.)

“Overall, the 167 trees (or 162, in the best-case scenario presently) are nowhere close to the number the community originally was told during the Community Engagement period in 2019,” Willman said. “This has been a huge disappointment to the Community Council and the St. Anthony Park community at large, and, we are told, generated more constituent contact to Ramsey County than any other issue in recent memory.”

Pat Thompson, a District 12 council member, agreed, saying, “I think this whole thing has been damaging to Ramsey County’s reputation in the St. Anthony Park neighborhood, and that is not good for anyone, because they have an important role to play.”

According to an email to interested citizens from Ramsey County, trees north of Buford Avenue will not be removed until 2023. That leaves time for continued evaluation of whether more trees can be preserved.

The email also states that in response to community concerns, the commitment to plant new trees was raised from 55 to 70.

For its part, Ramsey County has cited damage to roots during construction, and the resulting instability of the trees, as public safety concerns about why some trees needed to be cut down.

In the final analysis, I believe that public buy-in to the project is important. As the county forges ahead with its work on Cleveland Avenue it has lost an opportunity to build goodwill with the neighborhood. And that lost opportunity comes at a time when public confidence in government seems to be flagging.

Scott Carlson is managing editor of the Bugle. Bugle freelancer Anne Holzman contributed to this report.