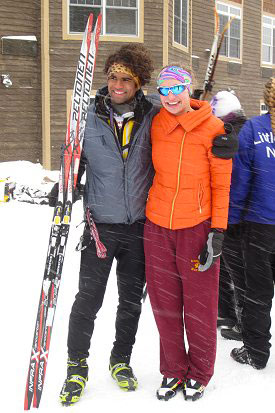 Even with his impressive race, Landrum’s skis (and generosity), were destined for a bigger finish. After his race, as Landrum was heading out to watch the girls’ classic pursuit, a friend asked about the type of bindings he used on his skis.

Mattie Watts, a skier from Irondale High School, was minutes from her start—without her skis. Landrum quickly grabbed his skis and gave them to the distraught Watts.

She headed to the start line with skis made and waxed for a guy nearly 4 inches taller and 20 pounds heavier than her.

As the race began, it soon became clear that Watts had kick, but the skis were not ideal. Vivian Hett, the No. 1-ranked skier in the state, started 23 seconds after Watts and began to erode the gap between them.

Within 3 kilometers, Watts’ lead was gone and Hett was on the tails of her skis, but Watts regained the lead and pulled away on the downhills, powering her way to a six-second victory.

Landrum was so impressed, he asked for Watts for an autograph—on his skis.—Contributed by Luke Rustad, assitant coach of the Nordic Ski team at Como Park Senior High School and a 2009 graduate of the school.