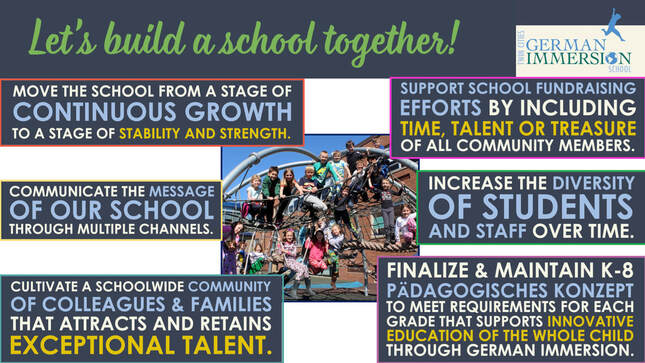 Despite its popularity, as evidenced by the school’s lottery enrollment system and waiting lists, TCGIS has struggled to attract students of color.

According to the Minnesota Department of Education, of the school’s 587 students, 83.5 percent identify as white compared to 21 percent of all students in the Saint Paul Public Schools district.

“The student body right now and the families enrolled are not really representative of the larger Twin Cities community,” acknowledged Rich Iwen, a TCGIS board member. “So we’ve been working for the last few years to make sure that every family in the Twin Cities knows about the opportunities that they have to enroll at TCGIS.”

One of the school’s strategic goals is to increase diversity in its student body and staff. Iwen, also chair of the school board’s communication committee, said TCGIS is working on raising awareness of the school through social media, local publications, advertising and school fairs.

“We just have to hope that, as families submit to our lottery, that over time our population represented in the school will become more representative of the Twin Cities,” Iwen says.

The TCGIS enrollment deadline for the 2022-23 school year is Feb. 16. Visit tcgis.org for more information

TCGIS also is working to support its current students of color.

Several years ago, TCGIS created a diversity and belonging committee to address its recruitment challenges and create a more welcoming environment, said Julie Alkatout, chair of TCGIS’ board of directors. For guidance on its efforts, the school partnered with AMAZEworks, a nonprofit that offers anti-bias education curriculum and training.

One suggestion from AMAZEworks was to create a BIPOC (Black, Indigenous, People of Color) affinity group, which kicked off in May 2021 and has since had 23 families join for a total of more than 60 members, Alkatout says. At schools and workplaces, affinity groups typically function as supportive spaces for people with common backgrounds or interests.

The TCGIS group’s current priority is building community among families of color and establishing friendships among children and adults, Alkatout noted. As the group grows, additional goals may be defined. For example, some members are interested in having a formal feedback loop with school administration.

Alkatout, who is a TCGIS parent to children of partial Arabian descent, has been organizing the meetings with the help of Christine Chitambar, a parent of two current TCGIS students. Chitambar describes herself as a woman of color who is half Indian and half Scandinavian.

“I needed my kids to be around more families that look like our family,” she said of joining the affinity group. Of her experience thus far, Chitambar says, “It’s nice to be around other parents that maybe have the same concerns, where I don’t have to explain everything.”

Eden Tsehaye, another TCGIS parent, was born and raised in Ethiopia and spent much of her adolescence and early adulthood in Germany. She said she’s glad to see her children able to communicate with relatives when they visit Germany. And Tsehaye says her kids think TCGIS “is the best school ever.”

Despite her children’s positive experiences at the German Immersion school, Tsehaye wanted to make sure they were being supported as Black children in a majority-white school, especially as they grow older and become more aware of their environment.

As an affinity group member, Tsehaye said she’s been able to share experiences and strategies with other TCGIS families to ensure all children feel safe and welcome.

“It creates a relationship where I feel like someone’s watching over our kids,” she said.

Meanwhile, Awet Osman and her husband, both born in Ethiopia and fluent in multiple languages, had no prior connection to German culture.

But they said they were eager for their children to have an immersion education. Since enrolling at TCGIS, German “has become a secret language” between their two sons, Osman said with a laugh.

While Osman’s children are doing well at TCGIS, she said she has always wanted the school to be more diverse.

“To live through diversity is better than to be told about it,” said Osman, who spoke of having lived in the diverse city of Montreal where respecting differences seemed to come more naturally to kids.

After the death of George Floyd, TCGIS organized a listening session for BIPOC families, which Osman said was “an eye-opener.” During that session, she learned a lot from others’ experiences and felt compelled to get involved.

“I joined (the affinity group) because I want my kids to feel proud of their difference and not be questioning their difference or whether they belong or not,” Osman says. She also notes that white parents are welcome in the group and hopes to see them participating in conversations.

One change TCGIS has already implemented, based on an AMAZEworks recommendation and family input, is to arrange classes so there are at least two BIPOC students in each group, whenever possible, rather than spreading those students across classes.

Some white families pushed back at first, Alkatout said, arguing that it was segregation. But the affinity group meetings gave BIPOC families an opportunity to show their support for the plan. Osman, for example, was “very happy” about the change, noting that it can help BIPOC kids feel less alone or under the spotlight in a room full of white faces.

Modern-day Germany can also be a source of connection for BIPOC students, said Katharina Schirg, TCGIS director of international programs and communication. “You might think Germany is a very homogenous culture, but it’s not. It’s a very multicultural country. So, we really incorporate a lot of modern materials that showcase the diversity of Germany.”