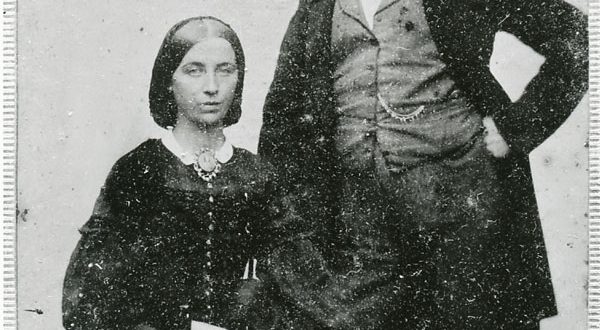 Gibbs family members were friendly to the Dakota

We don’t know why Heman Gibbs decided to buy that particular 160-acre plot of land in 1849, but one result was the happy reunion of his wife, Jane, with friends from her extraordinary childhood.

For the Gibbs farm near today’s intersection of Cleveland and Larpenteur avenues lay directly on a trail that Mdewakanton Dakota traveled each fall to reach their favorite spots for hunting and gathering wild rice.

Among these Native Americans were many Jane had known as a child while living with a missionary family near the village of the Dakota chief, Cloud Man, at Lake Harriet. The site in modern-day Minneapolis is now Lakewood Cemetery.

As a 5-year-old, Jane DeBow had been taken by the missionaries from her own family in upstate New York — essentially kidnapped — a story that so intrigued the Dakota that they named her “Little Bird That Was Caught.” She learned the language of her playmates, as well as many Dakota songs and rituals, and was influenced by the experience for the rest of her life.

When Jane was 12, the missionaries moved on, taking her with them. One of their stops was near Galena, Ill. When they left, Jane, now 17, stayed behind and found a job, eventually meeting Vermont native Gibbs.

The two were married in late 1848 and in spring of the following year took the steamer War Eagle to St. Paul, joining the flood of settlers into the newly created Minnesota Territory. Gibbs built a sod-roofed, dugout shanty on the eastern edge of his holding where they lived for five years until a one-room frame house was constructed.

Ox teams were used to break the ground and Gibbs soon became one of the earliest and most successful of the market gardeners that later would proliferate in the area, raising fruits and vegetables for the burgeoning population of St. Paul.

Jane and Heman Gibbs, possibly on their wedding day.

And soon, the Gibbses had visitors. Jane became reacquainted with members of Cloud Man’s band and regained her command of their language.

The Dakota trail through the Gibbs holding ran from the Minnesota River to the ricing lakes north of St. Paul. In 1914, the Gibbses’ eldest daughter, Abbie Gibbs-Fischer, recalled her mother saying that many of the Native Americans were dissatisfied with the treaties of 1851 that opened much of their former land to white settlement.

“The big treaty at Traverse de Sioux was especially distasteful to them,” Abbie recounted. “They were very angry at my father because he put a rail fence across their trail and would have killed him if it had not been for my mother.”

Instead, the Dakota teased Jane about her choice of a husband more than a dozen years older than she who was losing his hair. They named him “Prairie on Top of his Head.”

The Gibbses opened their home to the visitors, who dutifully gave their guns to Jane to keep while they were in the house. Abbie recalled the kitchen floor covered with sleeping men.

“Mother knew all their superstitions,” she said. “One was that if a woman jumped over their feet they could never run again. I can well remember my gay, lighthearted mother running and jumping all over their feet in succession as they lay asleep in her kitchen and the way her eyes danced with mischief as she stood jollying them in Sioux. We noticed that none of them lost any time in finding out if they were bewitched.”

These encounters continued through the 1850s, but tension was building between the races. Abbie recalled the last visit of her mother’s friends, “sullen and despondent,” in May 1862, several months before the bloody uprising that became known as the Dakota War.

“Well do I remember the dramatic gestures of their chief as he eloquently related their grievances,” she related. “My mother followed every word he said, for she knew how differently they were situated from their former condition.

“He said his warriors could hardly be kept from the warpath against the whites. That, so far, his counsel had prevailed, but every time they had a council it was harder to control them. That their hunting and fishing grounds were gone . . . there was no food for the squaws and papooses . . . their rations were long overdue and there was hunger in the camp.

“[(My mother)] stood and watched them sadly as they mounted their ponies and vanished down the old trail.”

The Gibbs Farm Museum is operated by the Ramsey County Historical Society. You can find out more at www.rchs.com/gibbs-farm/.

Less than a mile to the east of the Gibbs property was the farm of Benjamin Hoyt and his family, in the vicinity of today’s State Fair water tower. Hoyt, after whom the street is named, was a real estate speculator and lived on the claim while having a home built in what we now know as downtown St. Paul.

From a recollection of one of Hoyt’s sons, William, published in 1901, we can conclude that the family’s relations with Native Americans was considerably less cordial than the Gibbs’.

According to William, there was another Dakota trail that ran from Little Crow’s village at Kaposia (South St. Paul) to Lakes Josephine and Johanna. This trail roughly followed Lexington Avenue and bent northwesterly past the west side of Como Park and near the Hoyt farm.

On a Sunday in the fall, when only Benjamin, William and his sister were present, 300 or 400 Dakota passed through the area, most of them well to the west of the farmhouse.

“. . . [B]ut a dozen or more of the young braves came up and sat down on our wood pile or leaned against the staked and ridered [sic] fence which enclosed the farm,” William recounted. “Some of them began to amuse themselves by pointing their guns or shooting their arrows at our pigs and chickens.”

When one of the young men vaulted a fence to lead the way into the Hoyt watermelon patch, Benjamin set the family dog on him, driving the group away.

“My sister and I were greatly relieved and patted and caressed old Caesar and thought him as great a hero as his celebrated Roman namesake,” said William.

That night, the crops in one of the Hoyts’ fields were laid waste, presumably out of revenge for the watermelon incident, a transgression which Benjamin Hoyt reported to the agent at Fort Snelling.

The family soon moved to their new home, which was probably just as well.