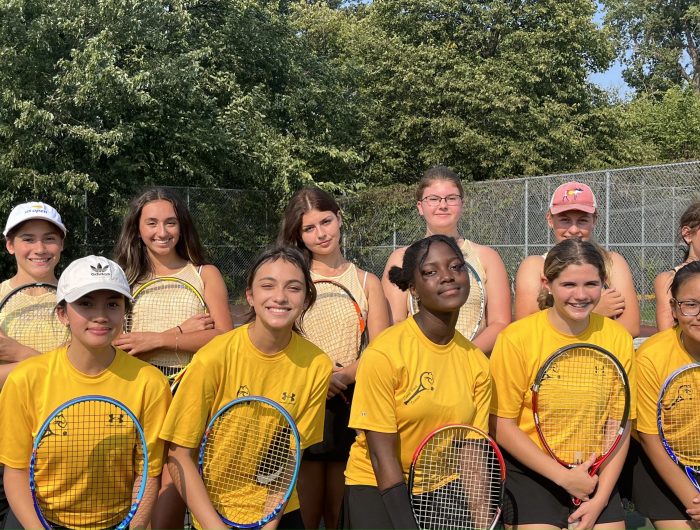 The 50th anniversary of Title IX has been celebrated during 2022, reminding us that athletic participation in school programs wasn’t always accessible for female student-athletes.

Como Park became a high school in 1979 with cross country, volleyball, tennis and swimming offered as fall sports for girls, while cross country and football were available for boys. (Soccer for both genders was added in 1987.)

Recent conversations with captains of the Cougar teams revealed many of those benefits.

Anna Lovat is the junior captain of a young girls-squad that enjoys training days as much as races.

“I love cross country because of the community it builds,” Lovat said. “It’s really important for young women to have a space where they can come to grow and learn and work together.”

The daily talks on training runs around the Como Park area are valued, as are the interactions at meets with peers from fellow St. Paul City Conference schools. There’s a supportive culture and shared hope that competitors will reach goals they’ve set for themselves.

For some, that may be setting a personal record and helping the team score. For others, it may mean running the entire race without stopping

“When we’re getting set to race, we see our competitors from Central, or Washington or Humboldt, for example, and we say hi to the other girls,” Lovat explained.

“We’re like, ‘Hi! Are you excited? How are you feeling?’ That’s my favorite part because they’re our competition but also our friends — and I love having that duality.”

Senior captains Betty Hebble and Caitlyn Coyle, along with junior captain Htoo Ray, are leading the Cougars on the soccer field. There are many new players in the program, including several varsity team members who have never played organized soccer before.

“Being able to grow together as a team and learn more about each other outside of soccer has been positive,” Hebble said.

“Everybody is open to learning regardless of their experience or skills,” Coyle added. “We go into each practice ready to learn. We don’t let losing keep us down. We’re able to keep things light and keep things fun.”

The Cougars faced a challenging non-conference schedule to start the season but remained upbeat despite the lack of wins.

The team set a goal of earning third place in the St. Paul City Conference like last year. The captains say that with continued focus and effort, they can get there.

“Soccer has taught me a lot about hard work,” Coyle said. “Sometimes you just have to push through the uncomfortable stuff, and know you’re not always good at something right away but if you keep working it’ll pay off and you’ll see improvement.”

Junior captains Ellery Tennison and Greta Seppanen are third-year varsity players who have enthusiastically stepped into their leadership positions. The core of the team has been playing together since middle school.

“I appreciate the friendships we’ve formed and the positive environment,” Seppanen said.

That positive environment has produced winning records for the last few years and raised current expectations.

“Either this year, or the next year, our goal is to be section champs and go to state,” Tennison said.

The thrill of competition is an additional benefit for the girls of Cougar volleyball. The matches in their sport are intense and emotional with energetic fans including boisterous student sections.

Junior captains Sophie Warner and Mia Trifilette-Simons are the leaders of another young team. When teams have junior co-captains, coaches feel confident about the future.

As for the present, the state of Como swimming is strong with 15 committed participants who support each other.

“I enjoy my teammates. We do a lot of team bonding like spaghetti dinners. We’re a pretty tight-knit group,” Trifilette-Simons said.

“Swimming and sports in general help us socially. We meet people from different grades, different ethnicities and backgrounds. Sports give us that in a way that not many other things could.”

The Cougars don’t let the cracks on the courts bother them. They’re having fun being outside together and improving their skills. As previously reported in the Bugle, new courts are coming in 2023!

With junior captain Ashley Hartwich as the team’s oldest player, and a mix of sophomores, freshman and middle-schoolers, the entire team is looking forward to a promising future together.