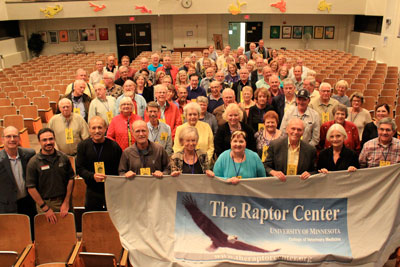 Members of the Murray Class of 1965 and guests gathered at Murray Middle School Sept. 11 to give a $22,000 gift to Murray, $20,000 of which will go to the Murray program with the University of Minnesota Raptor Center. Half of that gift came from a match from the St. Anthony Park Community Foundation.

They came from Colorado, New Jersey, Virginia, Connecticut, New Mexico, California, Arizona, North Dakota, New York, Alaska and, of course, various cities in Minnesota. Ninety of the 218 graduates of the Murray High School Class of 1965 gathered in St. Paul the second weekend in September for their 50- year reunion.

First stop: their alma mater (now Murray Middle School), where the group gave a gift of $10,000 to go toward the partnership program Murray shares with the University of Minnesota Raptor Center. That $10,000 was matched by another $10,000 from the St. Anthony Park Community Foundation. The money will be used to bring the Raptor Center’s programming into Murray’s seventh grade life science curriculum each year for six years.

The seeds for this project were planted five years ago when a group of 1965 alums gathered at Spill the Wine in Minneapolis, said class member Mick Peterson. “It was Myrna’s (Meadows) idea five years ago that we start this program,” he said. “With the foundation, we made things happen.”

Jon Schumacher, the foundation’s executive director, said Meadows—who works with nonprofits through Bremer Bank in International Falls, Minn.— contacted him about working with the foundation on the 50-yearreunion gift.

“The first donation was in 2010,” Schumacher said. The five years gave the foundation time to build its match.

The class actually raised $11,000, all of which was matched by the foundation. The $20,000 will go to the raptor center program and the extra $2,000 is going into a “teacher wish list fund,” Schumacher said.

The class gathered at Murray on Sept. 11 for a short program that included a demonstration from Mike Billington of the Raptor Center. As the group milled around the entrance to the school when they first arrived, Murray Principal Stacey Theien- Collins said she made the mistake of asking attendees if they knew where the auditorium was.

“Unless you moved it, I know where it is,” said one classmate.

The auditorium hasn’t moved or changed much other than some fresh paint and new carpet, but much else has. The school no longer educates students in grades 7 to 12. It’s a middle school for grades 6 to 8. There’s no hockey team—or skating band—and the swimming pool has been filled. The pool area is now the cafeteria.

But one constant is the dedication and support the school receives from its alums, Theien- Collins said.

“In my 25 years in education I have not seen one single example of a school supported like Murray is by adults outside of the school. Alums call a lot to ask how they can help.”

The people who were pivotal in orchestrating the Raptor Center gift were classmates Meadows, Joann Hayenga and Leslie Curtis, said Peterson, who emceed the Murray gathering and gave a good summary of the event: “Good program, good school, good class.”