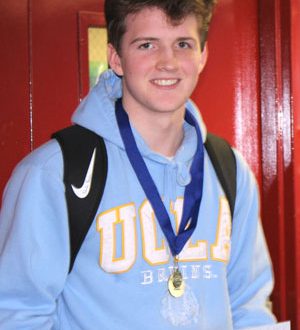 The award recognizes high school seniors who have excelled in academics, athletics and the arts. As a Region winner, Hanson will be honored at the Triple A Award on-court recognition ceremony at the Boys’ State Basketball Tournament in March. State award recipients receive a four-year, $1,000 scholarship.

During his Great River career, Hanson played on the football team for six years, on the basketball team for six years, on the baseball team for three years and will have played on the Ultimate team for three years after the spring season. Earlier this year, Hanson was awarded the Star Tribune Academic Excellence Award and the district sportsmanship “Why We Play” award for football. He is a past recipient of the Twin Cities Athletic Conference All-Academic award and the Bellman Young Scientist Award in Physics. For the past six years, he has helped organize Great River School’s annual spring concert fundraiser.