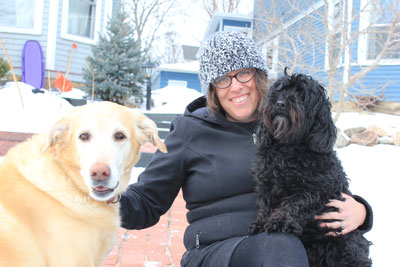 Guardians ad litem speak up for children who cannot

It didn’t take St. Anthony Park resident Sunny Comstock long to figure out what she might encounter as a volunteer guardian ad litem, a court-appointed advocate for children who come under the authority of child protection services because of allegations of abuse or neglect.

“As part of the training they have you listen to a recording of child’s 9-1-1 call [made] while the father is on a drunken rampage, beating on the mother,” Comstock says. “You can hear the mother scream, ‘Oh,God, he’s got the baby!.’”

Comstock, 35, describes herself as someone who spent an “ideal childhood” in a St. Anthony Park home that’s been in her family for three generations. She is not hesitant about acknowledging that she has been “pretty sheltered” and “is sensitive in real life.” The contrast with the situations she may encounter as a guardian ad litem is striking. She has been a volunteer for just a few months, but she will put her training to use in assessing and reporting to the court on the situations of children who may have been failed by every other adult in their lives.

The phrase “guardian ad litem” has the Latin meaning of “guardian for the [legal] proceedings.” Or, as Comstock says, “We’re observers, the eyes and ears of the court. For some of these kids, the only constant in his life is the guardian ad litem.” Some of the cases she encounters may be horrific. She can’t discuss the specifics, but she knows she might encounter children who have been sexually trafficked by their own parents or “kids raised in flop houses where people are doing drugs all around them.”

Comstock is expected to meet at least once a month with the child, in addition to investigating allegations of abuse and interviewing persons connected to case. In the most wrenching cases, she may have to recommend that children be removed from their homes.

Comstock, the mother of two school-age children, is determined not to let her emotions overpower her effectiveness. “This is the kid’s reality,” she says. “If they can handle it, I can find some way to do the job [of assisting them].”

It’s this kind of resolute spirit, among other characteristics, that makes guardians ad litem so highly valued by the courts systems they serve. Volunteers like Comstock are “well-respected by judges because they have no interest except the best interest of the child,” says Dana Ahlness, manager for the Guardian ad Litem Program of the Second District Court in Ramsey County. “They’re not swayed by political influences, and they’re unbiased and neutral.”

There is a “never-ending demand” for volunteers for the guardian ad litem program, Ahlness says, especially since case numbers have spiked in recent months. Successful volunteer applicants can expect to put in 5 to 10 hours a month after undergoing rigorous screening and training, including a criminal background investigation.

“We want to make sure they can handle the stress,” Ahlness explains. “It’s an emotionally charged and demanding volunteer commitment

“We talk about the intense emotions [that a volunteer may feel],” she says. “You might find yourself in a situation where you’re going to recommend that a parent’s rights be terminated. Are you going to be able to do this?”

Despite the potential stressors of the job, Ahlness says, “It never ceases to astound me how many people step forward to volunteer. I get a call a day. They really want to make a difference.” Or, as Comstock puts it, “I always feel that there are easier ways to volunteer, but none as satisfying.”

About 30 percent of volunteers are retired, Ahlness says. Younger volunteers may be interested in investigating careers in the criminal justice system. “We have a lot of law students,” since guardian ad litem service is “a great résumé builder,” she says.

For Comstock, the path to becoming a guardian ad litem probably began the year she graduated from college in 2007 just ahead of the biggest economic downturn since the Great Depression. With a degree in Spanish and Global Studies she had to shelve her original plan for working for a nongovernmental organization, but she quickly discovered that working “in the corporate world is just not for me.” As her family grew to two children and her husband returned to school, Comstock hit on a neat economic solution. She became a bartender, working evening shifts.

“I can make really good money [bartending],” she says, “but it’s not satisfying.” Volunteering as a guardian ad litem allows Comstock to “use my time and skill set to create the most impact.”

Comstock believes that her college-level academic studies prepared her well for her new role. Her fluency in Spanish allows her to work with families who may struggle with English, but she’s equally aware of the importance of understanding issues of poverty and cultural diversity in the lives of the families she will work with.

“My degree [taught me] to overcome my personal point of view,” she says.

Ahlness underscores the importance of attracting guardian ad litem volunteers of diverse cultural and economic backgrounds, even as she acknowledges that making an unpaid commitment of up to 10 hours a month may not be possible for those working full-time at the lower end of the economic scale.

“It’s a challenge to recruit a diverse community pool,” she says, saying that part of the strategy includes targeting ethnic and minority media outlets to advertise the positions. She’s also striving to correct a gender imbalance in a volunteer force that skews heavily female. And she explains, “We have cultural specialist employees and translators who can advise volunteers” how to understand community attitudes and issues with which the volunteer may be unfamiliar. “But, in the end, the volunteers are responsible for making the recommendations [about the child’s future.]”

Comstock says that the most critical—as well as the most difficult—part of her work involves weighing and evaluating conflicting accounts of the basic facts of the cases she handles. “You are listening to multiple sides—it’s a really big skill of being a guardian ad litem.

Her commitment remains strong. Pointing out that the children she serves now will one day be adults with the capacity to contribute to their communities, she says, “When we help them, we help ourselves. That’s why it’s worth doing this hard work.”

The next training session for the Ramsey County volunteer Guardian ad Litem Program is expected to begin in early April. For more information, visit www.casamn.org or call Dana Ahlness at 651-266-5270.