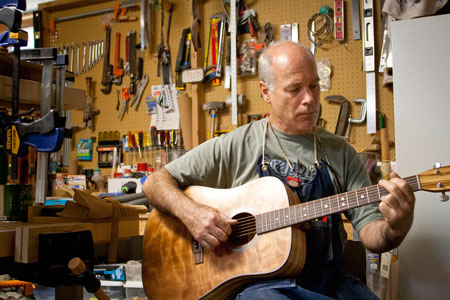 Why does anybody make anything by hand anymore? In this age of industrial specialization, when 3-D printers can copy in minutes parts that once took craftsmen hours of painstaking labor to fashion, why does anyone still bother to make things the old-fashioned way?

It’s certainly not for the financial rewards. Almost anything is more lucrative than handwork. Craftsmanship can also be fussy, demanding and often frustrating. And yet, to a dedicated group of skilled workers, there is nothing more satisfying than creating something unique, personal and permanent.

This month, three area craftspeople have laid down their tools long enough to share their thoughts and their viewpoints on the work of their hands.

“I’ve been interested in the Middle Ages for the last 25 years,” says St. Anthony Park resident Cameron Christian-Weir. It’s not such an unusual remark, until you remember that Christian-Weir is only 26 years old.

“My mom started reading the Arthurian legends to me,” he recalls, “and even as a kid, I liked Sir Gawain and the Green Knight best.” But it wasn’t until the ripe old age of 5 that little Cameron discovered his life’s work. That was when his uncle moved in.

“My uncle was really into archery,” is the way Christian-Weir remembers it. Suddenly a diffuse interest in all things medieval took on a sharper focus. By fifth grade, he was bringing his bow and arrows to meetings of the medieval reenactment group, the Society for Creative Anachronism. After an embarrassing equipment failure involving his store-bought fiberglass bow when he was about 13, he experienced a revelation: “I was like, fine, I’ll make my own bow.”

Cameron Christian-Weir roughs a bow in his shop. Photos by Lori Hamilton

Prophetic words. That’s more or less what Christian-Weir has been doing ever since. Working out of his home, he fashions his historically authentic long bows from wood— yew is a particular favorite, because, says Christian-Weir, “it tells you what it wants to be.” But he also uses hickory, wenge and ash, among others. He spends from 20 to 60 hours making each bow, tailoring it to the user’s height and strength.

“The rule of thumb is that the bow should be the height of the archer plus 3 inches,” he notes, and the average draw of a bow is 35 to 55 pounds, although “a fit, strong guy” like Christian-Weir himself can handle up to 120 pounds. Arrows, which he also makes by hand, are “fletched” with white turkey feathers.

Depending on the work involved, his bows sell for anywhere from $200 to $3,000 per weapon. “I’m getting to the point where I could support myself by bowmaking” he says, although he hasn’t given up his day job as a security guard yet.

Just don’t get Christian-Weir started on the differences between his long bows and the modern fiberglass compound bow. Although his clients do use bows for target shooting and occasional hunting trips, they—like him—normally have their attention fixed on a different scene altogether.

Crecy, Poitiers, Agincourt. For most of us, those are halfremembered names of long-ago battles. For Christian-Weir and his customers, they are the whole point. They represent archery’s finest hour, when the fabled long bowmen of Britain defeated (“No, annihilated!” he interjects) the French cavalry during the Hundred Years War. He quotes Shakespeare’s “Henry V” from memory, “We happy few, we band of brothers,” ostensibly in praise of the English archers of 1415, but a listener suspects he would be just as happy to a customers) in the world of medieval reenactment.

Still, glory isn’t the only, or even the main, motivation for Christian-Weir’s work.

“It’s the smile on people’s faces,” he says, “when you hand someone a bow that you’ve made for them and it works right. It fits them. It responds to them. It’s like an extension of their arm. They get this goofy smile on their face.”

Emily Donovan wants your weeds. She’s also interested in tree bark, and she allows, “even dead-heads are acceptable.”

Donovan is an artist who chooses her palette from natural plant-based dyes, which she makes herself.

This summer she’s working on a project she calls Ornaments of a Minnesota Growing Season. Supported by a grant from the Minnesota State Arts Board, she’s printed up a stack of fliers describing her project and inviting gardeners to share their bounty with her. When she sees a plant whose color she covets, she leaves a card for its owner.

Not that she always needs to present a written invitation. On a recent afternoon, she noticed a public works crew from the City of Falcon Heights pulling some “interesting yellow weeds on Larpenteur Avenue.”

Emily Donovan holds her dye palette with samples of her plant-based dyes that she has made. Photo by Lori Hamilton

When asked if she could have “some weeds” for her project, the bemused crew offered her the entire truckload. When she gets some new plant material, she says, “I chop them up and boil them down” in enamel tubs, which she keeps outside at her Como Park home. According to Donovan, the dyes that emerge from this process are “richer, not as vibrant [as chemical dyes] but more nuanced. They’re also not as consistent.”

Homemade dyes, she contends, have a long tradition in American life. “Recipes for dyes were listed in the back of cookbooks up until the 1940s,” she says.

As an artist, “I like the idea of handmade, and I like the processes,” she says. “The chemicals used in printmaking and oil paint are so bad for us—the idea of finding and foraging transfers to my work and inspires me.”

Donovan enjoys the potential for variation and the subtle shades that natural dyes give her paper-based art. She dips the paper in successive layers of different-colored dyes and uses wax-based batik technology to create abstract paintings. Eventually, the paintings she’s creating now will be part of a one-woman show that’s scheduled for the Bloomington Center for the Arts in June 2017.

She admits that her all-time favorite natural dye is black walnut, which she describes as a “rich, saturated brown” that is not without a few drawbacks. “If you get it on your hands, it can dye them for a month.”

“I come from a family of growers and bakers,” she says, adding that her mother grew up on a farm where black walnut juice was used to “cover the scent of human hands” on the traps that were set for animal predators.

This summer Donovan is on the lookout for lupine, red yarrow, bee balm and marigolds, but she’s not about to turn anything away. An important part of her project is experimentation.

“I’d like to expand the palette of what colors you can achieve,” she says.

As an artist whose work is mostly abstract, Donovan relishes the chance to make a human connection with nature-loving neighbors, when she forages for dye plants.

“Minnesota winters are so long,” she says. “When it’s summer, I try to be outside. People do amazing things with their gardens.”

When St. Anthony Park resident Dr. Dave Lee retired in early 2014 from his radiology career at age 57, he knew exactly what he wanted to do next. In fact, he’d been planning the second act of his working life for at least 20 years.

Lee now builds acoustic guitars from straight-grain redwood, myrtle and walnut as well as more exotic woods like zebrawood and rosewood. Since retiring, Lee has produced a dozen guitars in his home basement workshop. He says he’s “shooting for” a production schedule of two dozen a year.

Lee, who played upright bass as a kid and “grew up refinishing furniture,” has always known his way around the wood shop. Nearly two decades ago, he decided he wanted to do something with woodworking, but “I didn’t want to do cabinetry because the pieces are too big.”

He began to lay the groundwork for a second career as a “luthier”—the formal name for a maker of stringed instruments and the word he uses on his business cards—in 2005. He bought the woodworking tools that he’d need and began taking guitar lessons to better understand the concerns of his future customers.

Tired of the constant overnight shifts that radiology required Lee opted to retire early from medicine. “But there was no midlife crisis,” he says. “I planned guitar making as an avocation, but because I left medicine sooner than I thought I would, it became a vocation.”

Lee says that the most appealing thing about his new line of work is the knowledge that “I’m leaving a musical instrument that will create enjoyment. I like the creative process.”

He notes that in his life as a doctor, “you might read 100 to 200 X-rays a night,” but each guitar takes about 40 hours of work, which allows him more time to focus on “the steps along the way.”

And then there’s the patience required in his new craft. “You measure four or five times and you cut once. If you make one mistake, you could ruin 20 hours of work.” Not that he’s complaining: “There’s a difference between guitars and radiology,” he says. “Mistakes I make [with a guitar] won’t kill anybody.”

As a self-taught craftsman, Lee owes a lot to the Internet. “If I get stuck [on a technical problem],” he says, “the first place I go is YouTube. People so graciously put [solutions] on YouTube.”

At the moment, Lee is better at making his guitars than at selling them, but he hopes that will change as he gets used to the social dimension of what is basically a solitary pursuit.

“The financial goal is a goal, but it’s not the primary goal,” he explains, noting that he’s changed some professional habits now that he’s left medicine.

“Nobody wanted my business card when I worked at night as a trauma radiologist. Now, though, I give my card out at weddings, baptisms, bar mitzvahs.” Anyplace, in other words, where people gather, perhaps with music on their mind.

He’s also planning to show off his craft at the Park B4 Dark event on the evening of Thursday, Aug. 20. “And I’m amenable to having people come see the shop and play the guitars.” You can find out more about Lee’s guitars at www.leeacoustics.com.