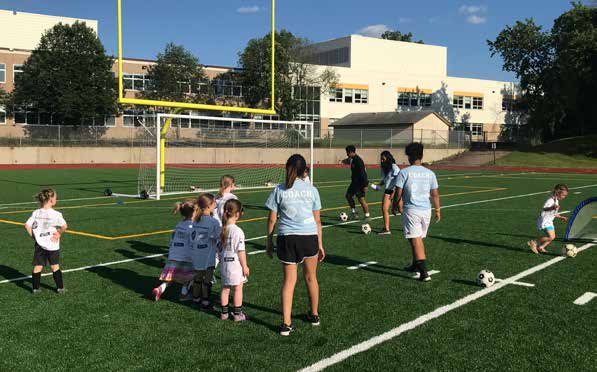 With summer in full swing, we look back at memories that were made in the Como Park Athletic Department during the 2018-19 school year. While students consistently build relationships and learn life lessons through athletics, the events and experiences that punctuate a particular year are unique. Here are five highlights:

Homecoming Football Game at Como—After decades of hosting homecoming games off campus, the Como Park High School community was able to cheer for the Cougars during their homecoming game on the field at school last fall.

With the turf installed inside the track and the green light from the school district and city of St. Paul, the Cougars enjoyed playing soccer and football games on the new surface during the fall season. The historic homecoming football game on Saturday, Sept. 29, created positive energy that extended well beyond the afternoon’s activity.

The Cougars clearly showed they belong among the best, posting an overall record of 23-3 (best in school history). Como climbed into the Minnesota Class AAA rankings, achieving a peak ranking of No. 3 and never leaving the Top 11. The team’s starting line-up was composed of four freshmen and a sophomore — a remarkable situation with elite potential.

Wrestlers Win St. Paul City Championship—The Cougars pulled off a major upset in the city wrestling conference when they defeated the three-time defending champs from Washington. Como’s 44-34 victory at Washington on Jan. 9 set off a joyous celebration and paved the way for the team’s first conference crown since 2004.

Senior Alonte Johnson and sophomore Kaleb Sears had top-­tier performances in both the city and Section 4AA competitions. Sophomores Sully Lucy and Stone Frasl were city champions in their individual weight classes, as was senior Mu Ku Shi. Additionally, Frasl qualified for the state meet at the Xcel Energy Center.

Gymnastics grows with surge in participation—One of the most happy and energetic Como teams this school year was composed of students who simply wanted to try something new. Cougar gymnasts had been dwindling in the single digits, but 15 girls showed up for an informational meeting last winter and those same 15 girls improved throughout their three-month season.

Sophomore Amelia Christ was one of the few experienced gymnasts, joining Como’s team after a decade of club gymnastics. She enjoyed the spirit and camaraderie of the Cougars and is excited for the program’s future with friends who appreciate challenging themselves in a supportive environment.

Some programs also feature community outreach, providing service related to their activity. For example, the Como Soccer Stars, boys and girls from the Cougar soccer teams, facilitate fun on the field for players ages 4-6 and 7-11. Families converge on the Como turf for four Tuesday evenings during the summer, smiling and socializing as their kids follow the lead of the high school players.

Middle-school athletics are a popular extracurricular activity for hundreds of St. Paul students each season. Here is the Bugle’s snapshot of Murray Middle School’s teams, which completed a successful spring campaign and conclusion of the school year:

Badminton—The Pilots finished at 7-4 and eighth-grader Violet Eicher made it to the conference quarterfinals in singles.

Baseball—The Murray Pilots played eight games last two weeks of the season. The boys got on a roll and posted a six-game winning streak before losing to Capitol Hill. Overall, the Pilots finished 2019 with a record of 9-4.