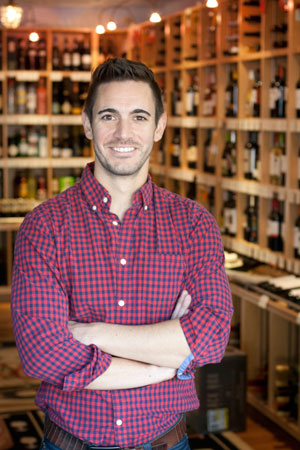 His next act: certified sommelier

Tim Hausmann, manager and wine buyer at the Little Wine Shoppe on Carter Avenue, has added a new notch to his career belt: certified sommelier.

The accreditation comes after six months of attending eight-hour classes once a week through the International Sommelier Guild (ISG) at the Art Institutes International Minnesota in downtown Minneapolis and then passing a rigorous six-section 10- hour exam that included a four-hour essay test, a food-and-wine pairing test, and a blind taste test of 22 wines and spirits in which he had to identify the type of wine or spirit, the grape, the country of origin and the region of that country that the grape came from.

Of the 12 people who started the course, four took the test, and Hausmann was one of two who passed it.

Hausmann, who has been working at the wine shop for just over a year, launched into the sommelier training to learn more formally about wine and its history, geography and the various laws that govern the industry.

“I love that stuff,” he said. “I could go off on tangents about geography and laws, but in the end it’s really what’s in the bottle that I need to know about for [his work at the wine shop]. Having this base of knowledge to focus on and help people, that’s what I wanted to do.”

Becoming a wine steward is part of the 30-year-old South Dakota native’s transition out of a career in musical theater that took him to Broadway and a two-year international tour with West Side Story. Ultimately, that “dream come true” of being at the pinnacle of live theater wasn’t the career Hausmann wanted.

“I just didn’t love it anymore,” he said. “My dream had come true of being on Broadway, but along with all the wonderful materialistic satisfaction with all of that was this huge sigh of relief that I had the freedom to do what I want now that I had the stamp of approval: ‘You’re successful as an actor.’ Before that I was too proud to walk away from it.”

As an actor in New York, Hausmann felt people only cared about whether or not you had the word “Broadway” on your resume.

“I didn’t want to only audition for Broadway shows,” he said. “I had done many productions that were more artful and more exciting and probably paid just as well as the Broadway show, but that was all people cared about. I looked at people who were 45 and 50 who had been nominated for Tonys and . . . they were still trying to get into the audition rooms or they were still on unemployment.”

That was a trajectory he didn’t find appealing, he said. “If I had loved it enough that every time I got on stage I felt everything was right in the world, I think I would have stuck with it; but it’s not how it was for me. It became a job.”

Hausmann took the advice of his father, a business consultant: “Don’t do anything that’s not fun.” When the stage work stopped being just that, Hausmann headed to Minnesota, where he has friends and a reasonably short drive to his family in South Dakota.

For now, he’s enjoying learning and sharing what he knows about wine and the trends in the industry. “It’s fun to be a part of that and translate it to the customer,” he said.

So, let’s ask the neighborhood sommelier what we should have with our Thanksgiving meal this year:

A good pairing for the turkey is a Dornfelder from Germany, a fruity red that helps cut the dryness of the turkey meat. “You need just a bit of fruit,” Hausmann said. “Think of cranberries and turkey; that’s Dornfelder. It’s unique, and it’s not Beaujolais or pinot noir.”

And the pumpkin pie? Hands down, bourbon.