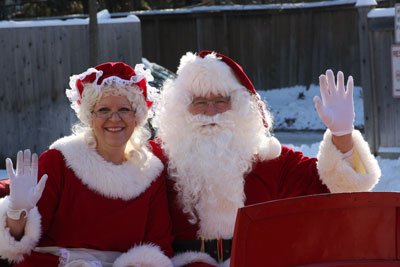 Santa and Mrs. Claus were on hand at Sunrise Bank on Como Avenue on Dec. 7 during St. Anthony Park's Shop Home for the Holidays event.

It’s not Christmas until you’ve seen Santa at least three times and decorations start appearing on the pine tree on the southwest side of Lake Como. (Neighbors say the tree has been decorated anonymously for at least 20 years and no one seems to know how the tradition began or who initiated it.) Here are a few holiday scenes from around Bugleland.

One of the many varieties of poinsettias on display at the Sunken Garden at the Marjorie McNeely Conservatory at Como Park. The poinsettia show is up through Jan. 5.

Santa Claus, Christmas Carol and carolers from Vienna Community Arts were on hand for festivities at Milton Square in St. Anthony Park on Dec. 7.

The Twin City Model Railroad Museum is displaying its dozens of model railroad layouts in a magical way through Feb. 22. The lights are turned down, the buildings and streetlights are lit and the make- believe town of Matlin is decked out for Christmas. The holiday Night Trains is open Saturdays, 6-9 p.m. There will be a special showing on New Year’s Eve, Tuesday, Dec. 31, 6-9 p.m. (Park Bugle photo by Lori Hamilton)

This little pine tree on the southwest side of Lake Como had just a few decorations on it when this photo was taken the first week of December. (Park Bugle photo by Stephen D. Parker)