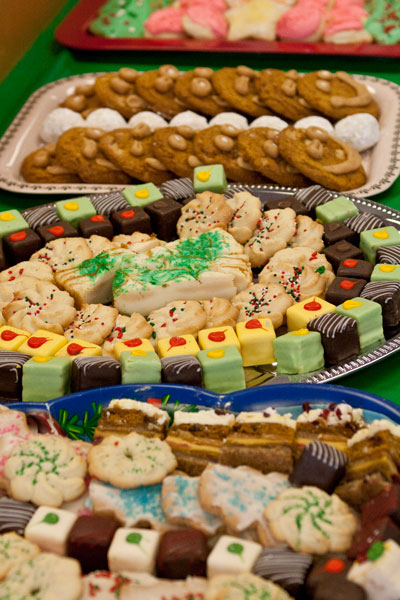 St. Anthony Park Home administrator John Barker plays bass at the Holiday Tea, as well as at various events throughout the year. Photo by Lori Hamilton

For 25 years, residents and guests at St. Anthony Park Home have been treated to a rich program of classical music and Christmas carols at its annual Holiday Tea.

And the program for the silver anniversary of the tea on Dec. 5 this year was no different. In addition to traditional Christmas songs, bassist John Barker, the home’s proprietor and administrator, and pianist Lisa Amsler, the home’s activity director, included Burgundian Carol (a French Carol), Air on the G String by Bach, Hallelujah by Leonard Cohen, Cannon in D by Pachelbel, and Ariosa and Jsu Joy by Bach.

Music is a frequent offering at the home throughout the year, but especially around the holidays. Festivities begin Thanksgiving Day, says Amsler. “Turkeys are purchased from Speedy Market [135 pounds of turkey]. They’re roasted on each of the three floors, giving off the wonderful aroma of Thanksgiving dinner soon to be served.”

As residents and guests sit down to tables draped with white linen, wine is served and Barker—a Julliard-trained musician—brings his bass to each floor to play for the nearly 250 people who attend the dinner.

The Holiday Tea began shortly after Barker took ownership of the home in 1991. For 25 years, he’s played bass accompanied by a variety of pianists. Amsler, who studied music at North Central University in Minneapolis and Kansas State in Manhattan, Kan., has played with him for the last 11 years.

December celebrations don’t end with the tea. Santa (aka Barker) shows up just after breakfast on Christmas Eve, visits with residents and delivers gifts. Later, Barker and Amsler play music for another hour or so.

The home is not silent on Christmas Day, as a number of St. Anthony Park neighbors come to the home to play music for the residents. “Carolers from the Park,” organized by Kathy Magnuson, co-publisher of the Minnesota Women’s Press, show up in the lobby about 11 a.m. and walk up and down the halls singing. Sometimes, residents join them as they carol through the building, Magnuson says.

Magnuson has lost track of how long she and her friends have been doing it. “It’s very informal,” she says. “We’re more about the enthusiasm rather than super high-level quality of singing—though we have some very good singers in our group.”

Some families of residents have made the Christmas caroling a tradition, she said. “They plan around it.”