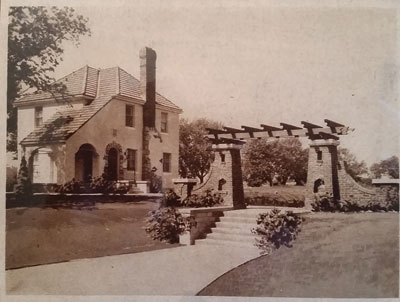 Hollywood Court is off the beaten path

The just completed model home in 1928 in what is now Hollywood Court.       Photo courtesy of Briana Vogen

It’s likely that many of the motorists who regularly whiz by on Snelling Avenue in Falcon Heights have never noticed a residential enclave on the west side of the busy street.

Tucked in between the TIES Education Technology Collaborative on the north and the Minnesota State Fairgrounds land to the south, Hollywood Court isn’t easy to spot or get to.

“Visitors will say, ‘How neat, I didn’t even know this was here,’” says longtime resident Judy Bailey.

When Jay Axelrod, an architect and builder, put what he initially called Cross Roads Court on the market in 1928, much of the surrounding area was agricultural fields and Snelling was just a two-lane road. That June an estimated 25,000 people made the trek to see the development’s model home in a two-week period.

“Cross Roads” drew on the name of the mansion that stood at the time on what is now the TIES site; “Hollywood Court” echoed Axelrod’s marketing imagery: “a California dream in St. Paul.”

The authors of St. Paul’s Architecture: A History (University of Minnesota Press, 2006) credited Axelrod with introducing “. . . the St. Paul incarnation of the English Cottage variant known as the ‘bungalow court.’

“The fashion flew into the city in 1925, fluttered about for three years in the city’s western suburbs, particularly on and around Cleveland Avenue, took on an increasingly Mediterranean air, then winged its way out,” wrote the authors.

Of the half-dozen such courts Axelrod built, the best example was said to be at 1657-67 Randolph Avenue, still extant today.

Cross Roads Court clearly was Axelrod’s most ambitious undertaking up to that point. The land had been part of “the beautiful Snyder estate” to the north and was directly across Snelling from an airport, Curtiss Northwest Field, today the site of Curtiss Field Park.

Axelrod platted 26 home sites and designated a 40-foot boulevard down the center of the site as green space that all the homes would face. Traffic would follow a roadway encircling the addition and “thus every home will face on a quiet, beautiful park unmarred by unsightly delivery trucks and safe for children to play in without risk from automobiles.”

Besides an ornamental gateway at the Snelling entrance, Axelrod planned an arbor at the west end of Hollywood Court and a fountain in the middle. Part of his sales pitch was that only county taxes would apply, since the development was beyond the St. Paul city limits.

Thirty local firms contributed goods and services to the construction of the model home, said to be the first in St. Paul with linoleum floors throughout and textured and tinted plaster walls.

Within weeks, a St. Paul Daily News headline announced “Cross Roads Court Model Dwelling Is Bought by Woman.” It turned out that Mrs. Dagmar Hoffbeck, apparently a widow, had toured the home during the opening and fell in love with it.

“Needless to say, I am very well-satisfied with the house,” she was quoted as saying. “I expect to take a great deal of pleasure in the complete equipment of the house and the many features of convenience so thoughtfully included in its design.” Selling price: $9,500.

Strangely, Axelrod did not follow up the initial publicity with an advertising campaign to sell lots in the development. This may have been a sign that he was running into financial difficulties, possibly brought on by the downturn in the real estate market that preceded the Great Depression.

About 1930, Axelrod brought his 20-year architectural practice to a close and went to work for a firm selling building materials, supplies and equipment.

During the 1930s, it appears that only a few homes were constructed on Hollywood Court. Late in the decade, contractors Adam and Arvie Ackerman, father and son, began building in what had been scaled back to an 18-home development. They constructed at least six homes, possibly more, in the next decade.

Most of Hollywood Court apparently filled in during the post-World War II period, within a few years after Falcon Heights was incorporated as a village in 1949.

By then the ornamental entry from Snelling was long gone and the park-like boulevard replaced by a conventional street.

The Hollywood Court of today may not match Axelrod’s vision, but the people who live there seem to like it just fine.

“What attracted my husband and I was the variety of houses and all the evergreen trees,” said Irene Gengler, a resident on Hollywood Court since the mid-1970s. “The closing of access from the Snelling and Larpenteur intersection meant one must come in from Hoyt and go north up the service road to get here. It can be a nuisance getting in and out, but I think it’s worth it most of the time. We certainly get less traffic.”

Judy Bailey has been a resident since the late 1960s and she’s optimistic about the future for Hollywood Court. “There’s been an influx of wonderful young families and I think it’s a time of renewal in the neighborhood,” she says.