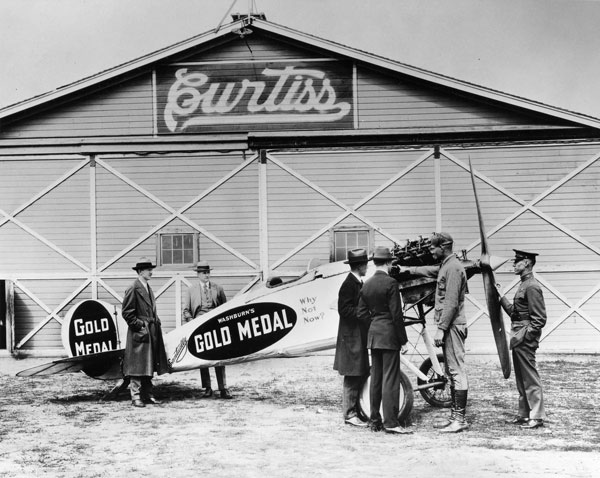 Nearly 6 feet 6 inches tall, Speed Holman towered over Washburn
Crosby executives as he showed them features on the race plane
they were sponsoring. Minnesota Aviation Hall of Fame

In 1924, Charles “Speed” Holman was short of the cash he needed to enter the National Air Races that fall.

Bill Kidder, manager of Curtiss Northwest Airport at Snelling and Larpenteur avenues in what is now Falcon Heights, had a suggestion: “Sell your wings,” he advised, meaning, find a sponsor.

And that’s exactly what Holman did, signing on with the Washburn Crosby Company, predecessor of General Mills.

One of the heroes of early aviation in the Upper Midwest, Holman did most of his flying elsewhere, but Curtiss Northwest became his headquarters for several weeks while Kidder’s mechanics modified his Thomas-Morse Scout biplane for racing.

In addition to a more powerful engine, the mechanics installed fuel tanks that were oversized to the point that Kidder referred to the aircraft as a “flying gasoline can.”

The plane was painted an eye-catching bright yellow and bore the trademark of Gold Medal flour.

Holman, only 25, flew to a second-place finish in the “On to Dayton” dash from Minot, N.D., to Dayton, Ohio, the national race headquarters, adding to his growing reputation.

He earned the nickname “Speed” from racing motorcycles at the Minnesota State Fair while still a teenager. Like Charles Lindbergh and other early aviators, he got into flying by first becoming a wing-walker and parachutist.

By the time he was 20, Holman had his own plane, barnstorming across the region and beginning to win prizes for his stunt flying. He was known for seldom wearing a parachute, because he tended to fly so low that it wouldn’t have done him any good.

The Air Mail Act passed by the U.S. Congress in 1925 was one of the signs that aviation was moving from its barnstorming stage into commercialization. Kidder departed Curtiss Northwest to help start Northwest Airways at the new downtown St. Paul airport and Holman came on board at about the same time as the fledgling airline’s first pilot.

He flew the mail to Chicago and back, later becoming Northwest’s chief pilot and then operations manager, as often photographed wearing a business suit as pilot’s gear.

An ad in the Minneapolis Tribune during Fair Week 1920. Minnesota Historical Society

But he kept on stunt flying, becoming the region’s best-known aviator and a hero to young boys everywhere.

Flying his plane back from winning a national race in Chicago in 1930, Holman knew a flying circus was performing at the Minnesota State Fair. Unannounced, he zoomed his plane past the grandstand and proceeded to perform a series of hair-raising stunts to the delight of the crowd.

Holman enthusiastically promoted the development of airfields and aviation in the region and in 1931 was on hand to perform in the air show marking the opening of the new Omaha, Neb., airport.

There, before 20,000 people jammed into the grandstand, he performed one of his favorite stunts, taking his plane up to about 2,000 feet and nosing it straight down in a power dive. But this time Holman was unable to right the ship and it crashed in a ball of flames, killing the 32-year-old pilot instantly.

Although it was never proven, one theory was that Holman lost control when his seat harness broke.

Back in the Twin Cities, 50,000 people gathered in and around Acacia Park Cemetery in Mendota Heights for Holman’s burial. A group of 20 or more planes circled overhead, with one peeling off and sweeping downward to drop a wreath of flowers on the grave.

In his eulogy, Gov. Floyd B. Olson called Holman “probably the greatest stunt flier of all time” adding, “he made his flights not alone for the thrill of adventure, but that in order that he and the aviation industry might learn what planes could do under adverse conditions.

The St. Paul airport was named after Holman and a memorial at the field bore the inscription, “He belonged to the heights and the heights claimed him.”

Two new interpretive signs at Curtiss Field Park, 1555 W. Iowa Ave., Falcon Heights, will tell the story of Curtiss Northwest Airport, the flying field that flourished on the site in the early 1920s. The signs will be in place by the time of the city’s Spring Together event, 11 a.m. to 2 p.m., Saturday, May 12. Funding for the signs was provided by a grant to the Minnesota Historical Society from the Minnesota Arts and Cultural Heritage Fund.