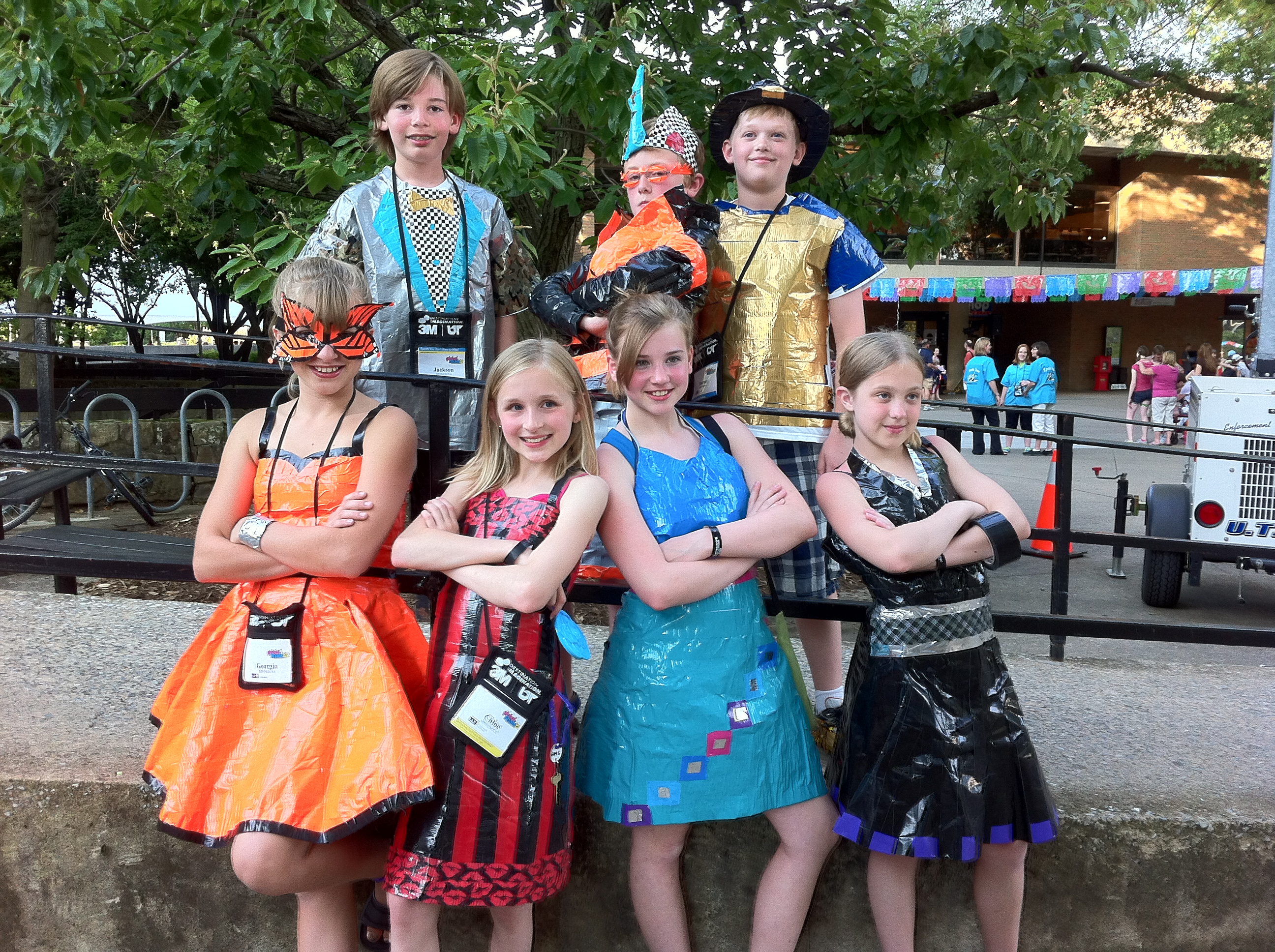 How do you get to Knoxville? Blood, sweat, tears and a little imagination

Lawn mowing, dog walking and car washing will define the summer of 2013 for many members of five local Destination ImagiNation teams as they continue through the season to raise money to help pay for their trip to the global competition in Knoxville, May 22-25.

Three elementary school teams (two from St. Anthony Park and one from Chelsea Heights) and two Murray Junior High School teams placed first or second at the state-level competition on April 20 at Champlin Park High School, which sent them on to the international competition. The students competed with 167 teams of elementary through high school students from across Minnesota.

Destination ImagiNation (DI) is a creative problem-solving program that offers students from kindergarten to college a chance to showcase skills in six categories: technical, scientific, fine arts, improvisational, structural and service learning. Each competing team of up to seven students chooses an area of interest from among six options and then solves challenges within that area—without the assistance of adults or anyone who is not on their team. The top two teams from each area of interest and grade classification move on to the Global Finals, held every year at the University of Tennessee.

A team of sixth-graders from Chelsea Heights Elementary School placed first at the state tournament in the fine-arts challenge. The team, the Purple Platypi, won the Da Vinci Award at both the regional tournament in March and the state tournament for their skit about a man who loves eggs and decides to steal an ostrich egg at a zoo to make the world’s biggest omelet. The Da Vinci Award is given to teams that show “exceptional creativity and problem solving.” The award’s traveling trophy will be on display at Chelsea Heights until the 2014 state DI tournament. The Purple Platypi are Goodness Adekanmi, Kajsa Andersson, Zach Konkol, Theo Lucy, Mitchell McCann, Michael Smith and Grace Tienter. The adult team managers are Wendell Andersson, Maria Tice and Don Tienter.

If you found a May basket filled with flowers and chocolate at your door on May 1, thank the two Murray Junior High School seventh-grade teams—I’m With Gabe and the ad lib-a-llamas—who sold more than 300 baskets to passersby at Speedy Market the weekend before May Day and then hand-delivered the baskets to recipients. The flowers and chocolate were donated by Speedy Market.

I’m With Gabe placed first in the scientific challenge, which included wind energy research, a piece of kinetic art driven by wind and the appearance of an “invisible visitor” that set the plot to the skit in motion. Team members are Forrest Ahrens, Ellen Carlson, Grace Commers, Winnie Commers, Earl Eldridge, Gabriel Reynolds and Eleanor Wriedt. Team managers are Marga Miller and Phil Carlson.

Team ad lib-a-llama placed second in the improvisational challenge, which asks that a team use only white T-shirts, washable markers and team members to create all costumes, sets and props for a 5-minute skit that the team creates at the tournament. The seventh-grade team includes Mia Gaertner, Elliott Hicks, Cara Husnik, Sydney Kranz, Fiona McKenna, Kelvin Nichols and Eli Pattison. The team managers are Ginger Kranz and Karen Larsen.

St. Anthony Park Elementary is sending the Mustached Penguins, managed by Anura Sirrius and Maja Beckstrom, and the Sinister Socks, managed by Jason Langer, to Knoxville.

The sixth-grade Sinister Socks placed second in the service-learning challenge. The team created a project to address a community need and then create a movie that documented the project. The members of that team are Georgia Langer, Chloe Hansen, Jackson Rysavy, Jackson Lee, Lara Steen, Tommy Freberg and Katrina Sweet.