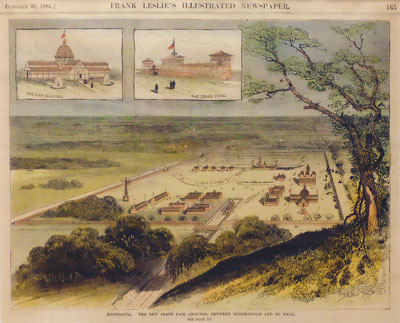 How the Minnesota State Fair found a home

The name of the Minnesota State Fair’s mascot, Fairchild, is said to be a tribute to Henry S. Fairchild, whose idea it was to locate the fair on what had been the site of the Ramsey County Poor Farm.

And that’s true, but it’s just a sliver of a much larger and richer tale of competition between St. Paul and its upstart rival, Minneapolis, more than 130 years ago.

Things got so heated at one point that the Minneapolis Tribune dismissed St. Paul as a “picturesque and beautiful suburb” whose time had passed.

“For 10 years this city has been gaining upon her,” the newspaper proclaimed, “and for three years has been neck and neck with her, and during the past two years has passed and distanced her in the race for commercial supremacy.”

Maybe. But Fairchild and his St. Paul allies won the battle for the fair because, let’s face it, everybody likes getting something for free.

There had been territorial fairs before Minnesota became a state in 1858 and state fairs ever since, all run by the Minnesota State Agricultural Society. 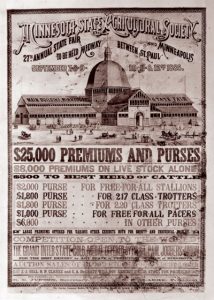 A poster for the first fair on the new grounds featured the impressive Main Building.

During its first two decades, the state fair rotated between cities in southern Minnesota, but there was growing sentiment that the exposition needed a permanent home. The 1884 event in Owatonna solidified that thinking: Bad weather, a competing circus and a murder all contributed to what was generally conceded to be a disaster on every level.

A location somewhere in the Twin Cities made sense. The railroad lines converged here, making transportation easy, and rural people were accustomed to coming to the metropolitan area, at least occasionally, to shop and conduct business.

St. Paul and Minneapolis already were blatant rivals and sensitive to criticism about it from the rural-dominated legislature. So, in November 1884, in a show of conciliation, members of the St. Paul Chamber of Commerce and the Minneapolis Board of Trade began meeting to discuss the possibility of establishing a “Union Fairgrounds” midway between the two cities.

According to a state fair historian, writing in 1910, “Each committee desired (the grounds) as near as possible to its home city, but with smooth dissimulation and an assumption of extreme fairness endeavored to conceal its real intention.”

And, “. . .even though the delegations from both cities entered a council room with palms in their hands, they had knives up their sleeves.”

Fairchild, a prominent real estate agent, was a member of the St. Paul committee. He suggested buying 100 acres of the Ramsey County Poor Farm for the fairgrounds.

The Poor Farm was where indigents were fed and housed and, to the extent they were able, worked to defray expenses. The county previously operated several poor farms, but by the time of Fairchild’s proposal had consolidated operations on 210 acres in Rose Township, next to the University of Minnesota’s agricultural campus.

Minneapolis, on the other hand, wanted the fairgrounds in a park envisioned for Minnehaha Falls, “a heaven-blessed spot,” which its representatives argued was really no farther from the two downtowns than the Poor Farm.

Fairchild countered with a compromise site, near University and Prior avenues, which, from all appearances, found favor with both committees. “Harmony at Last,” was the headline in the St. Paul Daily Globe. But the agreement fell apart within days and the two sides reverted to their previous positions.

The talk in St. Paul was that Minneapolis wanted the state Capitol moved to the new Minnehaha Falls park. The talk in Minneapolis was that St. Paul aspired to extend its western boundary to encompass the Poor Farm, a land grab if there ever was one. (That never happened. The site remained an unincorporated portion of Rose Township until Falcon Heights was formed in 1949.)

St. Paul City Attorney William Pitt Murray appears to have made the pivotal suggestion: that the Ramsey County Board should donatethe entire Poor Farm to the cause. This was not as untoward, jurisdictionally, as it might sound, because St. Paul Mayor Christopher O’Brien was also chairman of the county board.

A former legislator and city councilman, Murray knew his way around the halls of power. For that matter, it was common for city leaders at the time to have long records of public service and affiliations that overlapped. Fairchild, for instance, was a life member of the State Agricultural Society and for many years a Ramsey County commissioner.

Fairchild supported the idea of the land gift, as did a key member of the Ramsey County Board, George Hazzard, whose country home was just east of the proposed fairgrounds. The residence still stands at 1371 W. Nebraska Ave., near Hamline Avenue in St. Paul and will be the subject of an upcoming Park Buglestory.

In January 1885, at the annual meeting of the Agricultural Society, O’Brien presented the offer: a gift of $200,000 worth of land and buildings, no strings attached, “at a site where you can plant your home.” Society members applauded vigorously. Despite some maneuvering by Minneapolis interests, the enabling legislation was passed by the legislature and by early March, the deal was finalized.

A flurry of activity ensued that spring and summer. The city water system did not reach the new grounds, so wells were dug. A railroad spur was built, initially to bring in building materials, later fairgoers. The Main Building, with its large dome, was constructed, as well as a two-tiered grandstand.

That first fair lasted eight days — it was closed on Sunday — and Minneapolis merchants and manufacturers put any lingering resentment aside and were well represented among the exhibitors.

Despite several days of rain, attendance was helped by the fact that the railroads offered a special rate of 2 cents a mile for a round-trip to the extravaganza. Attendance totaled about 75,000 and the society cleared $20,000.

With obvious satisfaction, the state fair historian was able to observe, “No longer would [the state fair] be hauled about from town to town, like a wandering circus, putting up its tents in the locality which should agree to pay the most.”

Yes, the fair was finally home.