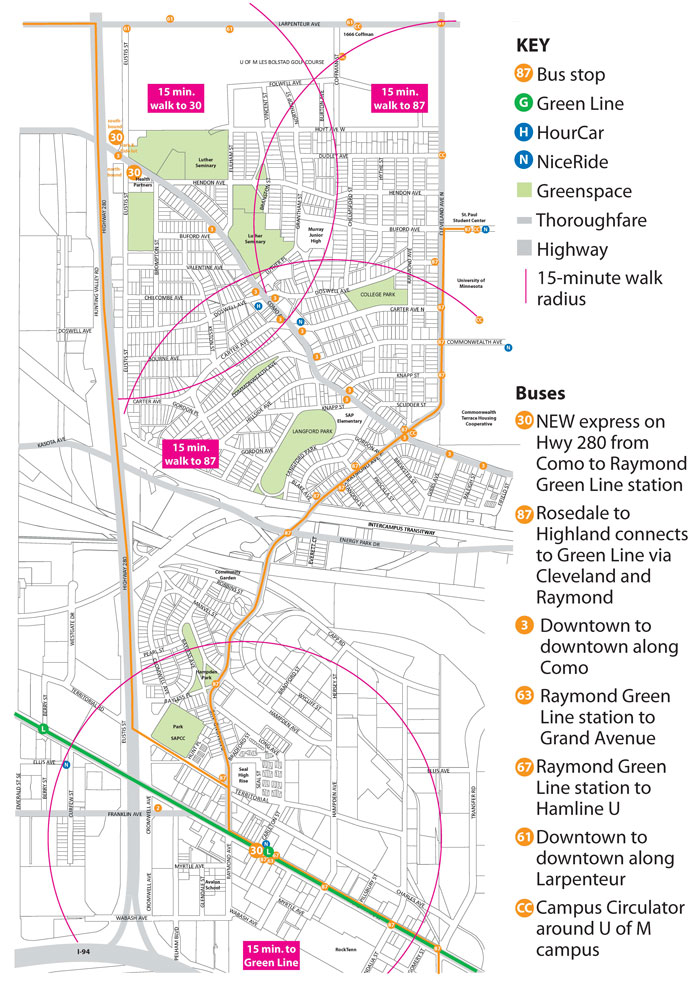 How to get to the Green Line

As the METRO Green Line opened on June 14, some bus-service enhancements also began that are intended to strengthen connections to the light-rail line.

Service on Route 67 runs every 20 to 30 minutes seven days a week. The route provides service on Minnehaha and Franklin avenues and connects with Green Line stations at Rice Street and Fairview and Raymond avenues, as well as the Franklin Avenue Station on the METRO Blue Line in Minneapolis.

More trips have been added to Route 65 along Dale Street and County Road B between the Rosedale Transit Center and a new southern extension to Grand Avenue. The route makes connections with Green Line light-rail trains at Dale Street.

Service on bus routes that run parallel to the Green Line also changed on June 14.

Route 94 provides nonstop, express service between downtown St. Paul and downtown Minneapolis. The route no longer serves the State Capitol and instead goes directly to the Union Depot in downtown St. Paul. Night and weekend off-peak trips on Route 94 have been replaced by Green Line service.

Route 50, a limited-stop service on University Avenue, is no longer running and has been replaced by the Green Line.

Route 30 is a new express bus on Highway 280 from Como Avenue to the Raymond Avenue station. Route 30 runs every half hour Monday- Friday, from 4 a.m. to midnight. It does not run on weekends. Route 30 also runs to the Quarry, a shopping center in Northeast Minneapolis.

Route 87 connects to the Green Line via Cleveland and Raymond avenues. The route starts at Rosedale Center in Roseville. The 87 runs every 20 minutes on weekdays, evenings and weekends. You can catch it at the St. Paul Student Center, 2017 Buford Ave.