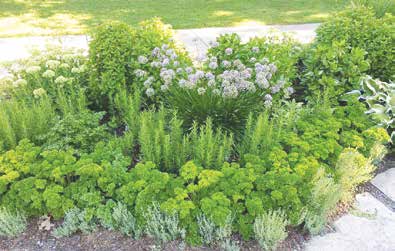 How to make a “lasagna bed” for your vegetables

Food gardening reduces the need to go to the grocery store and enables us to get outdoors and be productive. It also can be cathartic for those who enjoy physical work.

But what if your only patch of ground is lawn, weeds, or (gulp) creeping Charlie? The thought of digging it up by hand may be too overwhelming, especially if it’s rocky.

What else to do? Smother the weeds out!

Smother mulch gardening, aka “lasagna” gardening, uses thick layers of compost on top of cardboard or newspaper to starve the existing plants of sunlight. The cardboard blocks the light while the compost weighs it down and is the planting medium. Eventually the cardboard rots away and you won’t be able to tell the difference between a garden prepared this way and one prepared by digging.

While the lasagna method works best done months before planting, I had success doing it after I moved into a house in late November, then used this method the following spring and planted right away. It performed way beyond our expectations.

First, assemble what you need. I scavenge for cardboard, such as what is available from the dumpster at the Co-op. A single thickness is enough, but it needs to overlap to completely block light. The larger the sheet, the better, and holes should be blocked with more cardboard. It’s best to remove packing tape, but don’t sweat it. If you can’t find cardboard, newspaper also works, but needs to be at least a quarter inch thick.

Next, figure out how much compost you’ll need. It should be at least 3 inches deep, preferably 4 inches. Do the math based on the square footage of your plan. A 3- by 18-foot bed, for instance, is 54 square feet. At the recommended 3 inches of depth, you will need a half a cubic yard, the amount you can put in the back of a full-size pickup truck.

In your calculations, remember you don’t need compost on paths. A thin layer of organic material that doesn’t break down fast, such as woodchips or straw, will be fine. Well-defined permanent paths are important so you don’t compact the soil with your feet, meaning you may never need to turn the soil in them—ever. I like to make my beds about 2½-
feet wide so I can reach across comfortably, and my paths about a 1½-feet wide because walking down paths narrower than that in midsummer when crops are full size is like walking on a tightrope.

You can get black compost for free from the Ramsey County compost site on Pierce Butler Route near Prior Avenue, which is still open despite the stay-at-home order. There’s a huge mountain of finished compost there—just remember social distancing! The challenge might be the hauling out the compost, since you’ll need a lot. Hint: Use a digging fork instead of a shovel and take a pickaxe if you have one. Or share a paid delivery from a service like Kerns Landscape Resources with your neighbors.

After you assemble your supplies:

1. Spread out the cardboard or newspaper (wetted so you can get the compost on top of it before the wind blows it away)

Then you can plant right away, though it’s better to wait a couple of weeks for the cardboard to soften enough from moisture so the vegetable roots can penetrate it.

Generally, this deep mulch method works best in the first year with transplants or large-seeded crops, such as corn, beans, squash, and potatoes (especially good the first year). These have enough energy stores to be able to send a strong root down through the cardboard layer.

Small-seeded crops like lettuce and carrots are a little trickier in the first year. That’s because, counterintuitively, pure compost can be difficult to keep moist enough in the seed zone for good germination, especially at the shallow depths where small seeds are planted.

But small-seeded crops can still be grown with consistent watering until they’re established. A trick is to place two or three sheets of newspaper on top of the seedbed, weighted down on the corners, to keep the surface moist until they emerge. Just be sure to check frequently and remove it as soon as the seedlings start to emerge!

Why I don’t till

After reading all of this, you may think that starting a garden the old-fashioned way, by renting a sod-cutter and rototiller, would be less work. But tillage isn’t natural, necessary or sustainable.

While tilling does incorporate oxygen into the soil and stimulate microbes to break down organic matter and make nutrients available to crops, repeated tillage depletes organic matter very quickly and disperses the nutrients released in the process to the air or water. Farmers and gardeners make up for this by constantly replacing nutrients with manures or synthetic fertilizers.

The lasagna system builds soil the way nature does, layering undisturbed soil with organic matter, brought into the ground by earthworms and other soil organisms and root growth. Once established, large amounts of imported fertilizers aren’t needed, and the soil stays loose, eliminating the need for all that digging.

And weeds aren’t really a problem, either, because their seeds are buried deeply. A few will sneak in at the edges or when seeds blow in on the wind, but as long as you get those out while they’re small, weed control in a no-till garden is a cinch, and gets even easier with each year.

Lois Braun gardened for 19 years at the St. Anthony Park Community Garden and in a “guerrilla garden” she developed behind her apartment building, before she and her partner bought a home three years ago in Falcon Heights with lots of space for gardening. She works at the U of M developing hybrid hazelnuts, a native woody shrub, as a new perennial crop for Minnesota.