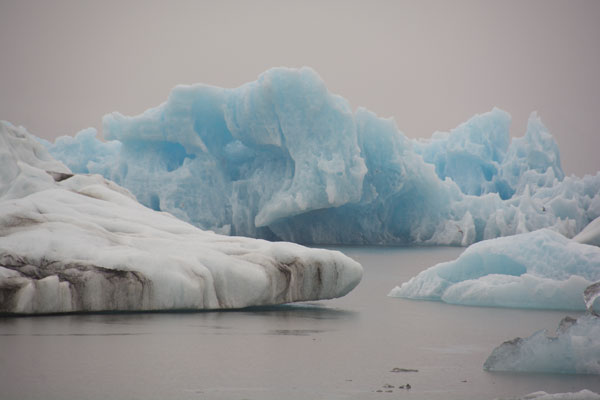 Have you ever considered visiting Iceland?

After reading the Icelandair in-flight magazine a few years ago, my interest was piqued. So recently, my family (including my husband, daughters, mother-in-law and sister) vacationed in Iceland for two weeks. I was initially surprised to learn it has become one of the top vacation destinations for Americans. However, after experiencing both its urban and rural delights, I certainly understand why travelers are flocking to this unique and picturesque country. It is a land of natural wonders and historic landmarks.

We flew to Iceland on a Sunday evening in June. After departing a few hours late, we arrived at Keflavik airport at 8:30 a.m. on Monday. After meeting up with my sister, eating lunch and doing a bit of shopping, we boarded the FlyBus for Reykjavik. It is located 45 minutes from the airport. By the time we arrived at our hotel it was 1 p.m. Since we had been awake for 27 hours, we were fortunate that our rooms were ready early. We rested for a couple of hours before heading out to dinner. Our hotel was within walking distance of the Perlan (or “Pearl”), a museum that houses a nature exhibit, classy restaurant and magnificent observation deck, all constructed on top of six geothermal water tanks. The food was delicious and the views were incredible.

The next day we took a long walk to thoroughly explore downtown. The city itself is quite compact and easy to navigate. The capital region, which includes Reykjavik and its suburbs, is home to two-thirds of Iceland’s total population of 350,000. We visited Hallgrímskirkja, which is one of the icons of Reykjavik. It is an unusually plain church built on a hill and visible from all over the capital. From there we walked to the main retail and restaurant district. Afterwards, we headed to Harpa, a recently constructed concert hall. We took a guided tour and learned about the history of this innovative performance space. After lunch, we went to the Settlement Exhibition, which was just a few blocks away. We also visited the oldest house in Reykjavik, which contained several informative photography exhibits. Once we arrived back at our hotel, we decided to order pizza, — except that few restaurants deliver. One of the hotel staffers helped us out by calling around and placing our order —in Icelandic.

The following morning, we met our tour group and began our six-day bus tour, mostly along the 825-mile Ring Road that circles the island. Our charming and engaging guide provided insightful commentary along the way. Each day we made several stops to explore a variety of natural and cultural sights that included magnificent waterfalls, local museums, a turf church, Icelandic horses, a glacial lagoon, lava formations, a geothermal nature bath and the site of the first Parliament. Each evening we stayed in a different hotel. Bountiful breakfast buffets were included, but we were on our own for lunch and dinner. I thoroughly enjoyed being on a bus tour, since it enabled us to cover a lot of territory in a short amount of time.

After the tour ended, we spent two additional nights in Reykjavik then rented a van and embarked on our self-drive adventure to the rugged and remote West Fjords. We set out for Stykkishólmur, northwest of Reykjavik, where we boarded the car ferry to Brjánslækur. It was a fairly calm three-hour trip with one quick stop at Flatey Island. Once we arrived, it was just a five-minute drive to the Hotel Flokalundur, where we enjoyed the restaurant while overlooking a scenic fjord, a long, narrow sea inlet between cliffs. 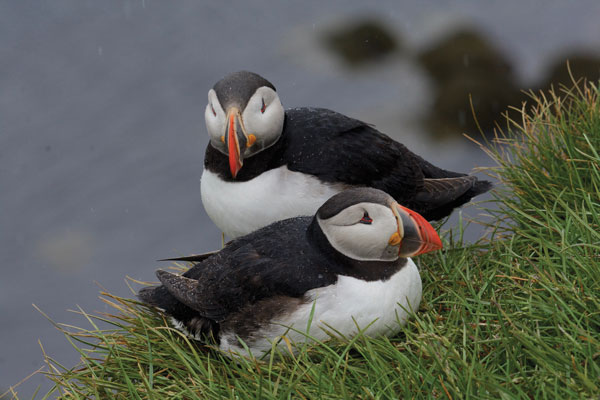 Iceland Puffins were plentiful on the Latrabjarg bird cliffs. Photo by Jeremy Wight.

The following day, our main destination was the Latrabjarg bird cliffs on the far western edge of Iceland. We were expecting to see hundreds or even thousands of exotic birds. We started out by visiting the Folk Museum in Hnjótur, which was chock-full of interesting items from yesteryear. Once we arrived in the parking lot adjacent to the bird cliffs, I immediately saw a puffin lift its head up over the edge. As we moved closer we noticed hundreds of puffins, all nesting on the cliffs below. We were just a few feet away from these colorful and charismatic birds. And though it was cold and rainy, we barely noticed. We took loads of pictures and marveled at the excitement of connecting with puffins in the wild. We finished out the day by driving to Patreksfjordur, staying in a cute hotel overlooking yet another delightful fjord. 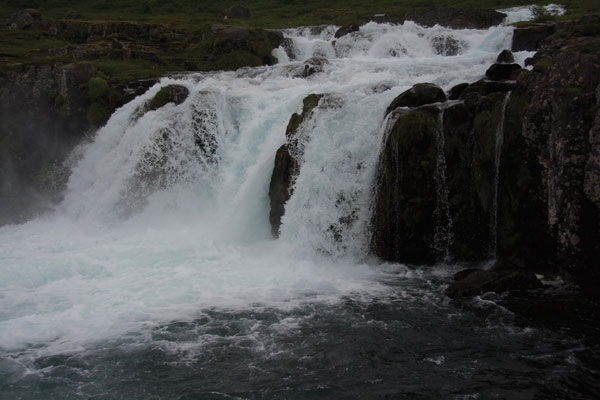 Dynjandi waterfall in the West Fjords. Photo by Jeremy Wight.

The following day, our first stop was Dynjandi, a majestic, fantastic waterfall. Then we continued north to Ísafjörður, which required driving through low-hanging clouds on winding gravel roads loaded with potholes and lacking guardrails. Once we arrived at our destination, we enjoyed dinner at a pizzeria followed by a walking tour of the old-fashioned downtown. The next day we visited the Arctic Fox Centre in Sudavik. We learned a lot about this reclusive animal — the only mammal indigenous to Iceland. Then we drove six hours back to Reykjavik. The next day was departure day. We took the FlyBus back to Keflavik airport. Even though we arrived more than three hours early, it was barely enough time to check our bags, clear security and eat dinner. The airport was crowded and chaotic.

During our two weeks in Iceland we learned so much about its culture and traditions. Black licorice (liquorice) is the favorite candy and many chocolate bars are flavored with it. Finding a laundromat was an unexpected challenge, but after some research we were able to use the facilities at the Reykjavik campground. Lysi (cod liver oil) is served at breakfast buffets. Some of the locals fill up their water bottles directly from waterfalls. Colorful and warm handmade wool sweaters are worn by many Icelanders. The midnight sun made sleeping difficult at times, especially in hotels with inadequate draperies. Meals (and everything else) are extremely expensive, so be sure to budget accordingly.

Icelanders are proud of their heritage and happy to share it with visitors.  Nearly everyone spoke English and locals were very helpful. I recommend a trip to Iceland if you are interested in unusual volcanic landscapes, bountiful scenery, and learning more about this lovely and peaceful Scandinavian island nation.

Janet Wight is a resident of Como Park where she lives with her husband and daughters.