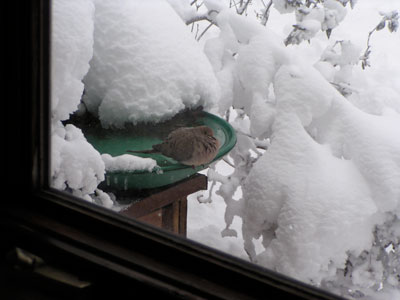 If you want to attract birds to your yard in winter, give them a bath

We’ve had a brutal winter so far and feeding the birds helps them get through these subzero nights. But just as important as seed and suet, perhaps even more so, is providing a source of water for the birds.

In warmer winters, the edges of ponds, lakes and streams offer water. There are also some springs that stay open for most of the winter. And I’ve seen water seep the base of cliffs.

I have a heated birdbath with a heating element built into the base. In the past, I used an immersion heater that sat in the bath, but that presented challenges when it came time to clean the bath and heater.

Most heated birdbaths come with a short power cord, so you will need an extension cord. Be sure to use one that’s designed for outdoor use.

You want to be sure that you have a grounded outdoor electrical outlet for your birdbath. This is not a do-it-yourself project. Hire a qualified electrician to do this for you. Do not run an extension cord from indoors; that’s not safe.

Bird stores have birdbaths of different designs and sizes. Look for one with a surface that gives birds a sure footing. Most birds won’t step into the bath, but if they do, they need to be able to stand without sliding around and able to take off without slipping.

The concrete baths that some folks use in the summer will probably crack in the winter. The concrete absorbs some water and freezing will damage it.

I don’t think I’d try a glass birdbath in the winter. If it did freeze, you’d have broken glass to clean up. And they usually have a slippery surface that would be unsafe for the birds.

Your birdbath should come with mounting brackets that will let you put it on a railing or the edge of a planter. Most can also be mounted on a pedestal. You could even set one on a patio table or a stump. The weight of the water should keep it in place.

Starlings often walk right into the water and drink while they bathe—sounds like a typical two-year-old, doesn’t it? Starlings like to get in, flap their wings and hop about, splashing water all over the place, again, like a two-year old. Starlings seem to be rather filthy birds. I don’t know what they get into, but the water looks pretty bad after they’ve bathed. You’ll have to clean it out and refill it after they’re done.

I clean my birdbath with a stiff brush that I bought at a bird store. I scrub around, letting the water splash out till it’s all gone, then rinse and scrub with some fresh water till all the grit and droppings are out. Rinse it and then refill it with clean water. I usually clean the bath every other day, but if there’s been a starling invasion, I may need to clean it more than once a day.

Some folks use a cleaning solution offered by bird stores, but I just use water and a bit of elbow grease.

I’m often asked if it’s safe for birds to bathe in subfreezing weather. There are anecdotal stories about a bird flying off from a birdbath and freezing in mid-air, dropping to the ground. I’ve never seen that substantiated anywhere.

Some folks put a board across their birdbath to discourage bathing, or float a disk of bubble-wrap to keep birds to the rim of the bath.

According to the National Audubon Society, birds can bathe safely in winter. They have interlocking feathers that shed water so little of it actually reaches their skin. And there’s a layer of down against the skin as well.

So, if you want to attract more birds to your yard, and do them a big favor, consider providing water for them this winter.

Clay Christensen’s book, The Birdman of Lauderdale, is available at local bookstores and bird stores as well as online from BirdmanBook.com.