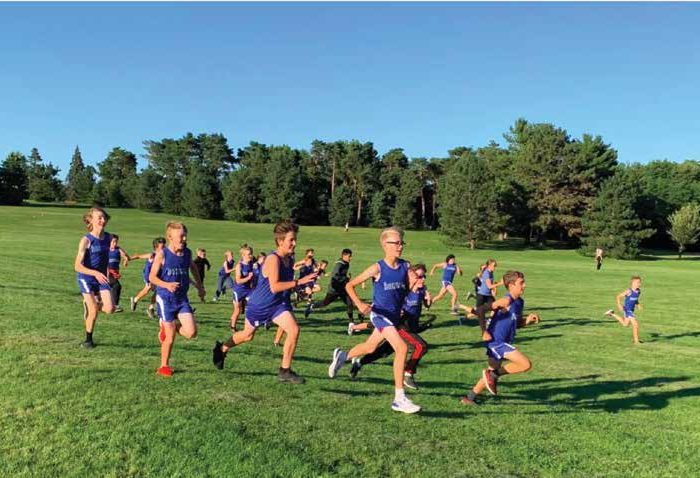 Immersion School harriers off and running

Only a year ago, the Immers (Gavia immer or loon) of the Twin Cities German Immersion School (which is in the Como Park neighborhood) kicked off its very first cross-country season

Now, in the second season, “it’s not only the running that’s fun,” says Lucy Anderson, one of the Immers. “It’s about being part of the team that matters.” And with a strong middle-school team of 38 runners, the German Immersion Immers are toeing the start line again.

The Immers are competing in a local conference with several other middle schools and at invitationals, including the Humboldt Invitational and the 23rd Annual Tom Watson Mustang Invitational. Seventh- and eighth-graders are also representing their school at the largest single-day high school meet in the nation, the Milaca Mega Meet.

Even though the Immers have a full season of meets planned, “running is not really about races but a chance to improve and feel good about oneself and others,” said Paul Tuite, a cross-country parent. “The goal of athletics and school is to aid in the development of each child, and this requires a supportive environment from classmates, parents, teachers and coaches. Cross country provides for many an opportunity for growth as measured individually.”

For some runners like Anderson, it is the joy of being a part of a team. For others, like Luke Karvonen, another Immer on the team, he runs cross-country because “it is competitive, but as long as you try your best, that’s all there is to it.”

Through the TCGIS cross-
country program, these middle-schoolers are learning to enjoy the sport of running for a lifetime. Cindy Miller, another Immer parent, noted that the “team spirit is an inspiration. The kids support each other from the first runner to cross the finish line to the last one to cross.”

Chris Tabisz is a middle-school social studies teacher and head coach for track and cross-country at the Twin Cities German Immersion School.