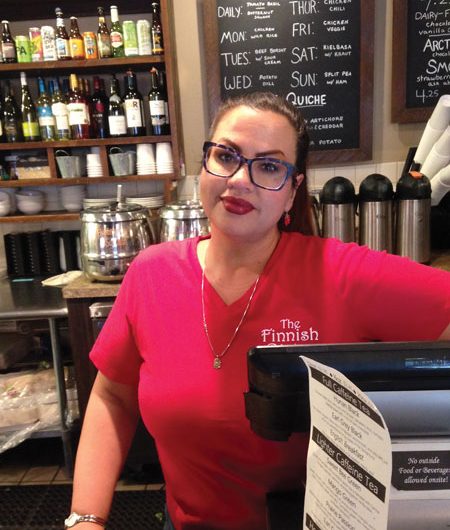 In the nick of time Before holiday rush, Como Avenue repaving project wraps up (for now)

On Halloween evening, merchants along the heart of St. Anthony Park’s downtown district got a treat: Their main street—Como Avenue—reopened after weeks of being closed for repaving.

Construction of Stage 3 of Como Avenue repaving (just past Doswell to Commonwealth) began in early September and ended Oct. 31. The finish of the road project didn’t come any too soon for Sandra Weise, owner of the Finnish Bistro Coffee & Cafe.

“For me, this has been the third year of construction,” Weise said, noting she renovated her building in fall 2016 and, like her neighbors, has had to contend with repaving sections of Como Avenue for the past two summers.

“Thank you to the neighborhood, because without their support, I don’t know if we could have made it,” Weise said, noting that neighbors organized during the construction period to make sure her coffee and café had plenty of business.

It was the neighborhood support that convinced Weise last June to reject the offer Applebee’s To Go made to buy her business.

Two doors down from the Finnish Bistro, Bibelot Shops manager Jolene Borland was also relieved to see Como Avenue reopen. “It’s been a long summer,” Borland said. “We are very pleased that our loyal neighbors continued to shop us and continued to support us.”

Borland said the road project had some negative impact on her store’s sales as well, though she did not have precise revenue figures.

However, as the Bugle went to press, the fate of Bibelot was uncertain. KSTP news reported that Bibelot owner Roxana Freese is planning to retire and sell her four Bibelot stores, including her St. Anthony Park location. Bibelot’s continuation apparently hinges on Freese finding a buyer.

Whatever Bibelot’s ultimate fate, the Como Avenue reopening in the heart of St. Anthony Park’s business district comes ahead of the all-important holiday season, which can generate up to 25 percent of many retailers’ annual sales.

Repaving parts of Como Avenue began in 2017 with some sections of the work occurring earlier this past summer. The third phase of the project, scheduled for 2020, will stretch from Eustis Street to the St. Paul city limits at Emerald Street.

The Como Avenue reopening in the heart of St. Anthony Park’s business district comes ahead of the all-important holiday season, which can generate up to 25 percent of many retailers’ annual sales.

The project will include 6-feet-wide painted bike lanes on both sides of the street. Stage 2, between Buford and the Doswell Avenue intersection, began in early July and extended for several weeks.

Como Avenue was originally paved in 1921 and was last paved in 1960. The sidewalks along the street were installed in 1969.