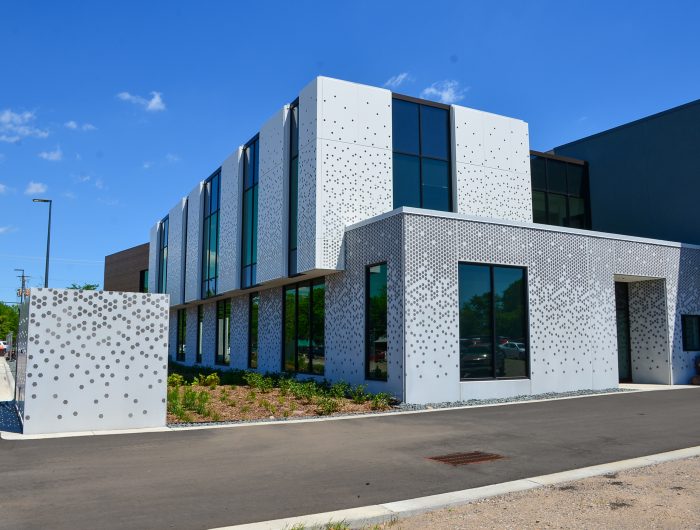 The International Institute of Minnesota, a social service agency for immigrants and refugees, has completed its $13 million building renovation and expansion project.

Construction began on the nonprofit’s 1694 Como Ave. building in December 2020, and the institute began re-entering its offices in March 2022.  In the interim, services were offered remotely or from temporary rental offices in St. Anthony Park. On June 23, the nonprofit hosted an open house for clients and supporters to see the new space and learn about its programming.

“The place is so nice,” said Aster Ayele, a recent graduate of the institute’s nursing assistant training program. “It feels so bright and clean.”

Among the improvements were new interactive training labs for medical careers and hospitality students, which trainees like Ayele are now able to use.

With increased space, institute officials say the organization will be able to serve an additional 500 people each year, in addition to the 3,000 clients who already utilize its services.

Jane Graupman, executive director of the institute, said it felt “really incredible” to welcome students and clients into the new building, especially after two years of the pandemic.

“They are the life and the soul of the building,” Graupman says.

The institute was intentional about making the new and renovated space feel welcoming, Graupman noted. Most of the new art, for example, was created by immigrants.

“I’ve had lots of people say it really makes them feel at home and feel very comfortable,” Graupman said.

During the planning process, Graupman spoke with students about what would be essential to them in a new space, and nearly every class noted the importance of feeling safe. Quiet spaces, private areas, new lighting elements and improved security systems were all incorporated to address this goal.

Besides functional renovations, Graupman notes that demand for the institute’s programming and its growing staff necessitated the additional square footage.

The institute’s expansion will benefit not only its clients but Minnesota at large, Graupman said, noting the state’s labor shortages, particularly in the health care sector.

Ayele, who recently passed the state exam to become a certified nursing assistant (CNA), cited this shortage as one of the reasons she signed up for the institute’s training program. Originally from Ethiopia, Ayele moved to Minnesota in 2007 and has been working as a dietary aide at Regions Hospital for the past 10 years.

Being a nursing assistant is “helping someone to survive… Health is more important than anything else,” Ayele said. She hoped to start the training program years ago, but it proved difficult while raising two young children. The fact that the institute moved some of its programming online during the pandemic made the program more accessible to her, she said.

“It was great for me, especially the teachers,” Ayele said. “They are so good; they are respectful, because they know English is our second language. They’re helping us.”

Now that she has passed the exam, Ayele says she plans to apply for CNA positions at Regions Hospital.

With the yearlong building project complete, Graupman reflected on how the institute’s efforts were fueled by community support and a growing recognition of immigrants’ contributions to their neighborhoods. Graupman said that amid rampant societal divisiveness and a lack of trust among neighbors, this construction project gave her faith.

Local supporters, donors and funders like the Saint Anthony Park Foundation have been a critical part of the nonprofit’s success, Graupman said.

“It’s great to live in a community that is so responsive,” she said, whether assistance is offered through grants, fundraising for the capital campaign or collecting pots and pans for a newly arrived refugee family.

“This is definitely an exercise in having so much affirmation for how much good there is in people and in our community,” Graupman said. “It’s really remarkable.”

Christie Vogt is a regular contributor to the Bugle and a former employee of the International Institute of Minnesota.